The trick to a satisfying Comic-Con 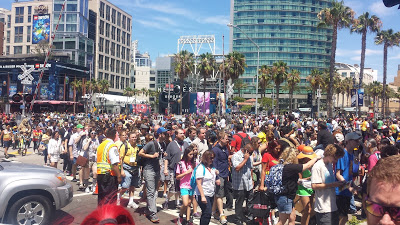 Happy SDCC Eve. If you're new to Comic-Con, or coming back after a long absence, you might feel overwhelmed by all of the information that's been presented. There are hundreds of panels to attend, an ungodly number of exclusives, overlapping events, conflicting restaurant reviews, a shuttle map to figure out, gaming tournaments and cosplay contests battling for your attention - it's a lot to take in.

And guess what? It's going to get even worse once you arrive! As your feet or shuttle bus approach the convention center and you see the crowds teeming in like a mass of insects, as you walk into the Exhibit Hall and perceive all the comic books, game demos, photo ops, footage, signings and so on screaming at you like a nerd acid trip - you will almost definitely be overloaded.

Once that happens, you might become so dazed that all your earlier intentions evaporate. It happens to a lot of people. They see 563 things at once that look inviting or they decide to cautiously absorb the whole scene slowly. They become passive and reactive instead of proactive. And later - on the way home - they remember later that one action figure they meant to buy or the pilot they wanted to see. This is why so many first-timers come home with the feeling that they missed something.

So here's my advice: make of a list of 3-5 priorities. These should be your absolute can't-miss events, exclusives, panels, signings, photo shoots, etc. Have them on your phone, have them written down, and schedule your Con around them.

Let everything else go - you can still keep them on the B-list, where if you have the extra time to make them happen, they happen. But if you arrive at the Con with a list of 22 things that you are determined to conquer, you're setting yourself up for failure. There's just too much competition from other people who want what you want, too many long lines, and too many surprises. You'll wind up spending your time and energy on stuff that doesn't matter. Narrow your focus and you're more likely to get what you really want and come home Sunday night in a satisfied state.
Posted by Valerie