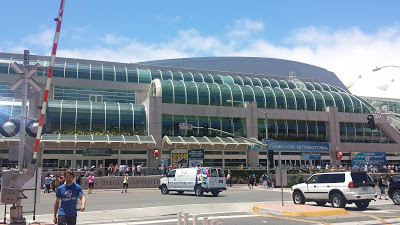 If you've been to Comic-Con before, you can skip all this. Everyone else, here are a few pieces of guidance for the rest of the week.

If you haven't yet, make a list of the exclusives you want, the booth numbers they'll be at, and the panel times and room numbers. Use the CCI app or make a list on your phone. It's a very safe bet you'll be distracted by the circus around you and forget otherwise. Also make a list of which back issues you need.

And while I don't want to kill all the joy of Exhibit Hall shopping, definitely use your phone to see if you're being wildly overcharged. Sometimes you'll see books marked as "out of print" when there are 62 used copies available on Amazon or action figures marked as "rare" when there are always a dozen circulating on Ebay.

If you try to barter, do so strategically. If you go in and try to haggle aggressively like you're at a swap meet on Thursday, you'll get a cold reception, unless you're buying in volume. (If you want 2 or more of something, pretend to look back and forth between the items and deliberate; often the vendor will propose a discount.) On Sunday, prices get more flexible because vendors want to unload as much product as possible. You'll see lots of markdowns, but go ahead and ask about getting a deal if you don't see anything advertised.


Also - be prepared for the Exhibit Hall to smell like a biohazardous swamp at some point. If you have a sensitive nose, bring something to dab underneath it 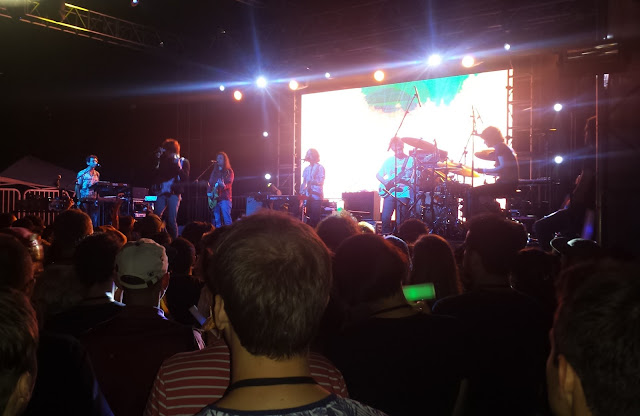 This one might seem weird - but check online SDCC coverage. When you're in the thick of things, it can be hard to spot some of the coolest collectibles or hear the rumors about the best surprise guest ever expected at a certain panel. Tapping into online coverage can help you stay on top of things.

Don't bother with all the tried and true Con favorite restaurants that are spilling over with crowds. I'll talk about this more later in my Eating Well at Comic-Con post - but in general, take a chance on the emptier places. The Headquarters on the other side of the Hyatt can usually seat people almost immediately at various restaurants, and the higher-priced places are always a faster bet. It's mindblowing to me that people will wait an hour outside a crowded, loud, mediocre restaurant to avoid paying the extra ten dollars that the relaxing, more delicious restaurant up the block would cost.

Panel etiquette: If you get up to the microphone at a panel, be succinct and resist the urge to tell your life story or ask 4 questions when each person is allotted 1. A lot of times this isn't intentional; people get lost in the moment and keep talking and talking. Also, don't hold your iPad or camera above your head for a prolonged period, blocking the view of the person behind you.

Bring your own chargers and spare batteries when possible. Getting a good charge can be tough in the convention center - and that's if you can find an open outlet. (Try upstairs in the room 27 area - that tends to stay one of the most spacious, coolest areas of the center.) But if you find yourself at a low percentage and have no other recourse, Hilton Bayfront and the hallway lounges in the North Tower at the Marriott can usually accommodate you.

Use Bag Check if you're buying tons of stuff. It's in the lobby near A and E and usually costs just a few bucks so you can roam around free and unencumbered. Be aware that you can't leave your items here overnight. Also take advantage of the local hotel UPS and Fed Ex stores to ship your stuff home mid-Con, rather than letting it pile up in your room. 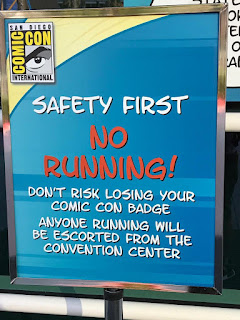 In terms of meeting celebrities, this is not something you can plan. People will stalk certain areas to see celebrities and their handlers emerge, or linger in the Marriott lobby. These plans rarely work out. Instead you'll get in an elevator on Friday morning and find yourself face to face with some famous old actor your mom would kill to meet and you'll exchange that neutral elevator smile and that'll be it.

But if you DO run into someone, be polite, non-crazy and respect whatever signals they're throwing out. Don't swarm them, don't follow them, don't make them hate coming to SDCC. Some attendees behave horribly when they see someone famous at Comic-Con. One of my most terrifying SDCC experiences was getting swept into a Jack Black Exhibit Hall vortex that reached claustrophobic proportions. Don't be that fan.

Be polite when getting photos of cosplayers. The general etiquette is to ask first. However, if someone is already posing for 6 cameras, there's no harm in jumping into the mix. In terms of taking pictures with cosplayers, remember that you're often going to be in a humid, crowded environment; if you're damp with sweat, don't press up against the cosplayer.

Be aware that borrowing badges is a risk. The staff does check IDs sometimes and there are penalties for badge fraud. Also be aware that swapping a badge back and forth isn't that easy and nimble unless you're literally staying next door. Just getting inside and either doing the Exhibit Hall or going to a panel is a serious endeavor. Also be aware that most everyone I know who's done this has wound up furious at their partner in crime, because someone stayed at the Con way longer than they promised. It's inevitable. 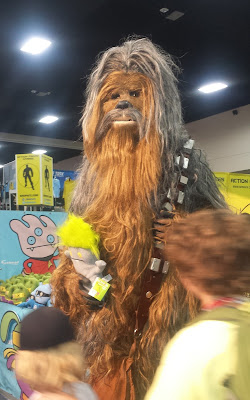 Finally, be prepared for the Con to amaze and surprise you in some ways and to let you down in others. There's always some expectation that doesn't get met, some disappointment or sense of deficiency. At the same time, there's a lot of adventure to be had and most attendees have at least one thrilling surprise each Con. Try to keep an open mind and you'll have a more enjoyable experience.