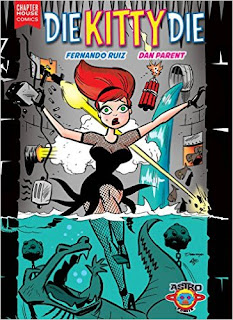 Do you read Archie? If not, we have something in common; I was like you once, assuming Archie was too bland for my sophisticated reading palate. Then at SDCC 2013, I caught on to the furor over Kevin Keller, the first gay character in the Archie world, and picked up the title in a show of rainbow support.

What I discovered: Archie comics are awesome. I became an ardent fan of Kevin’s creator, Dan Parent, and then last year at SDCC I discovered his comic, Die Kitty Die, co-created with Fernando Ruiz – and that was incredible too. (Seriously, pick it up.)

Dan was at ECCC last weekend, where he let me pick his brain about Die Kitty Die, diversity in comics, Archie, running a Kickstarter and other topics. 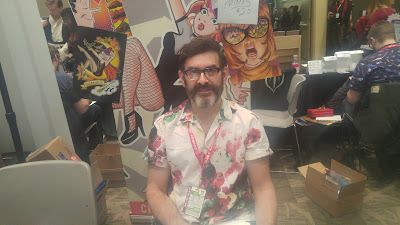 Let’s talk about Die Kitty Die, which I just love. I’ve been feeling detached from comics over the last few years but this is a comic I really like. I think you did something great here.

We did exactly what we wanted to do. We’re fans of Archie and Harvey Comics, and this was a way for us to pay tribute to the things we like.

You single-handedly converted me to Archie fandom with Kevin Keller. Do you hear that from other people?

Sometimes. At the time having a gay character was kind of a big deal; Archie was still considered family entertainment. Now you have gay characters in Disney movies and things like that. But at the time that was still not seen as much. But we knew the fans would like Kevin. That wasn’t a question.

Was that personally meaningful for you? When you were a kid, did you want to see more LGBTQ characters in your comics?

I always wanted to see all kinds of people - more inclusiveness in movies and TV shows. In the 70s, The Phil Donohue show used to have people from all walks of life. I remember one episode where my mom said, This is what a transgender person is.

They had that back then?

I think they said “transsexual.”

I’ve said that if you present stuff, kids can handle it better than anyone. The kids are going to be fine.

Do you identify as LGBTQ?

Me too.  Back to Kevin - you did something groundbreaking. And you’re still pretty young, you have a lot of career ahead of you. Going forward, will you make it a point to represent overlooked voices or will you take more of a “if it happens, it happens” approach?

It’s always there in my head. I never want to do it for the sake of doing it. But it’s always there. I want more diversity with characters in every way. Like Archie having his relationship with Valerie. That was something pretty new too, believe it or not.

6 or 7 years ago? We were going to have Archie and Josie in a relationship together, but they seemed very generic together. Valerie was way more interesting – not because of the color thing, but she was smart and kind of sexy and she put Archie in his place so it worked out for more than one reason. Then when [Archie CEO] Jon Goldwater came to the company in 2008, we talked about how white Archie was – and I asked, “Can we add gay people, can we add minorities?” And he said, “Please do.” So we ran with it and all it did was improve the company.

Have you ever read Dykes to Watch Out For by Alison Bechdel?

Well, I was obsessed with it growing up because it was the only lesbian thing I had. Would you consider doing an ensemble comic with gay and bisexual characters?

Probably. It hasn’t really presented itself to me because I’m working 24/7 doing this. But sure, definitely.

Everyone has a limited amount of time. You still work for Archie, right? In addition to doing Die Kitty Die?

Right. I do occasional covers and little stories here and there; I did a Kevin story for the Love Is Love book for Orlando [for victims of the Pulse Nightclub shooting] and I’m doing a thing now for a Kickstarter book called Femme Magnifique. We took famous real women from the 20th century and did stories about them.

Who did you pick?

That’s radical even for today.

She’s also the spokesperson for St. Jude’s which she took over from her father. So it was that combination – she was a feminist ahead of her time, the Free To Be You and Me, the St. Jude’s thing. I think I picked Eleanor Roosevelt as well. But Marlo Thomas is more fun to draw.

Let me ask you this. Creative people usually instinctively know their medium – they’re a novelist, a comic book writer, a poet. But in terms of exploring mediums, do you think comics present an opportunity for LGBTQ because the creative parameters aren’t so rigid?

Absolutely. There’s a lot of freedom in comics. It’s a gateway drug, I call it, for kids. A kid will pick up a comic before a novel. So they may be inspired by something on the page that they wouldn’t otherwise be.

Let’s go back to Die Kitty Die. Have you seen anybody do cosplay for this?

A girl from the Joe Kubert School - Shannon is her name, she was at New York Comic Con. She’s one of our Facebook friends.

Is Die Kitty Die a limited run or are you going to keep doing it and doing it until you get sick of it?

We’ll keep doing it until we get sick of it.

What did doing the Die Kitty Die Kickstarter teach you? What would you tell other people doing Kickstarters?

I would say, have it planned out before you do it. And make sure you can meet your requirements, your deadlines and goals. Because a lot of people fall behind and don’t even finish them, and that’s really bad if you’re taking people’s money. We were really good about meeting our deadlines. Make sure you meet those requirements and deliver your product. I’ve seen people get in over their heads.

If you missed Dan at Emerald City, you can see him at a bunch of other Cons, including San Diego, Boston, Denver and some others. Check out his site to keep tabs on his appearances and see what he's doing next.
Posted by Valerie