Emerald City Comicon is over 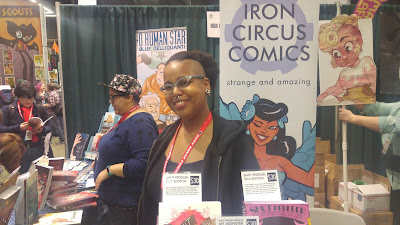 Emerald City Comicon is over. What did you think?

I don't have any groundquaking conclusions to share; I thought it was pretty much ECCC business as usual, and that business is good. Here's what clear to me. Emerald City is NOT the new San Diego Comic-Con. I know for a while it was popular to say, "You have to go to ECCC - it's like San Diego was in 2005!" But unlike SDCC, it's not going to mutate into some glittery Hollywood monstrosity of 12-hour lines and apocalyptic badge sales. Emerald City seems to have settled into a plateau - a good one.

With the SDCC badge sale next weekend, and me tweeting constantly about ECCC this weekend, I got quite a few emails from people regretting not going to Emerald City. The SDCC anxiety is starting to frazzle everyone's nerves, and it's unleashed a lot of second-guessing about other Cons. Well, it's too late for Emerald City, obviously, but it's not too late for other Cons. Just pay attention this fall for ECCC news - and do it. Seattle is fun, you're going to have a good time. 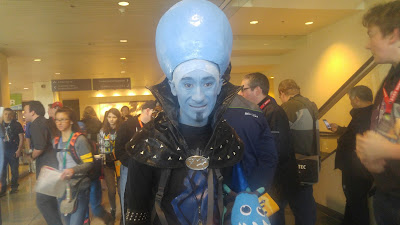 In terms of the Con from a vendor perspective, I heard mixed reviews. Several - okay, 3 - artists in Artist's Alley told me their sales were down this year and that they weren't getting the traffic on Level 6 they normally did. This wasn't surprising because I also met several attendees who weren't aware there was anything up on Level 6. I liked the layout as an attendee and found it easy to navigate, but I can see how people who didn't read up on ECCC's architecture might have missed the full story.

However, a few other people said they did very well this weekend. And I noticed Artist's Alley was doing a brisk business on Sunday morning, so maybe word had gotten around by then.

I didn't see as much cosplay this year, and what I did see was more conventional than in years past. Sometimes I couldn't tell if I was looking at cosplay or not, like with what could have been brilliantly executed or completely accidental Sarah Palin and Michael Moore cosplay. There was lots of good crossplay, like this boy slave Leia. 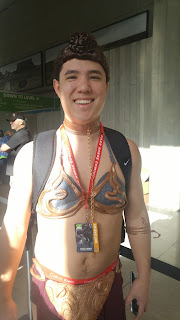 For the comics report: I already weighed in. On the whole, ECCC is the place to come to find new titles and creators. That hasn't changed. One thing I like about comic nerds is that they understand talent does not equal a major publishing contract. There are plenty of talented scribes and artists who will never show up on the New Releases shelves of your comic shop each Wednesday. This is the place to find them.

I skipped the Main Stage but attendees seemed pretty happy - especially with the Image panel. Over and over I heard about the same celebrities: Tom Felton, who I thought was still 12 but is apparently many women's imaginary boyfriend, Jason Momoa, who has the rare ability to captivate men and women, and the Outlander people.  Despite all the hubbub over this being Stan Lee's last ECCC, no one I know mentioned it. 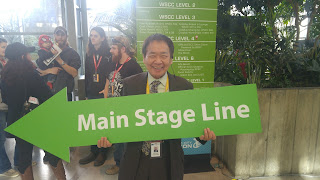 As far as the panels, I wasn't really feeling them this year. That's probably a reflection of my going to too many Cons for too many years, rather than the caliber of the programming. I did like the HAL panel on artificial intelligence - when attendees get up and ask about resurrecting the dead as AI or the legal-ethical intersection of merging with AI and becoming a cyborg, I know I'm home.

Generally speaking, I would say ECCC caters to a more intellectual and offbeat crowd than big pop culture Cons. It's not like I often meet vendors at SDCC who show off their t-shirts featuring prehistoric proto-horses while explaining their passion for extinct mammals. If you feel SDCC and NYCC have gotten a tad too mainstream for you, if you miss the weirdness that used to be found in various aisles and small press booths, Emerald City is definitely a good option. 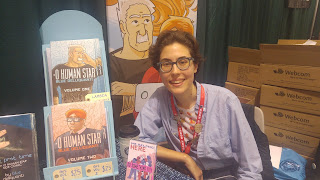 And ECCC is proof that less can be more. When SDCC or NYCC attendees ask if they should consider Emerald City, they always ask, "How many people go?" But attendance numbers aren't proof of quality. I've been to Cons that topped the 100K mark that were underwhelming and mediocre. And while ECCC does qualify as a "big Con" it still has a smaller Con feel. You have access to big name creators and actors that you never would at SDCC.

If there's one place I feel ECCC falls short, it's in night events. They had a few this year but everyone I knew was either aimlessly ending up in bars or going to hotel room parties. Neither of those are bad options when you're with the right people but somehow both felt kind of dull this year. Then again I didn't go out Saturday night at all, so maybe I missed all the action. 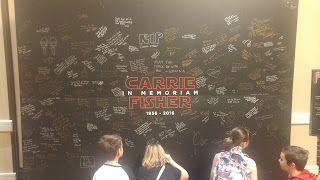 I'll probably go next year; hopefully you will too. If you're one of those never-beens who's still eyeing Emerald City with speculation, then yes, you should go. Seattle is fun, there's plenty to do, and you can mix ECCC with other activities quite easily. Getting in and out of the Con, grabbing a good meal, buying fresh fruit and groceries for your room - it's all very easy and navigable. If you know how arduous other Cons are, that's a huge selling point. Even taking a break and going to the Arboretum is easy to pull off.

I'll post some interviews over the next few days - and then it's SDCC season, all the way.
Posted by Valerie