Submit your work for the Souvenir Book 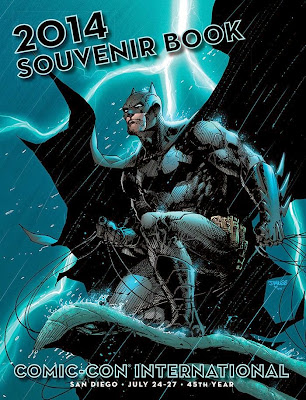 Much like Punxsutawney Phil, I'm going to make a prediction: I think this year's San Diego Comic-Con is going to be great. I just have a feeling. That doesn't mean we'll all get rooms at the Marriott Marquis, or be carried to the front row of Hall H on a palanquin, but I do feel like the programming, the guests, the surprises, the overall experience, will be exciting and satisfying for most attendees.

Yet one place this year falls oddly short is the anniversaries being celebrated. Each year CCI notes important dates - a famous artist's birthday, the anniversary of a character or comic book - and those themes guide art and narrative work submitted for the Souvenir Book. That's the thick, pretty journal full of articles and artwork you receive at SDCC. Some years are just ripe with these anniversaries. Last year was an abundance of riches.

This year, though, is slim pickings. That isn't to cast shade on anyone or anything being celebrated. It's just a smaller number of opportunities around which to center your work:

The 100th birthdays of Jack Kirby and Will Eisner. Obviously there's a wealth of their characters and achievements to be inspired by. In addition, CCI wants you to share any memories or personal encounters you may have had with these gentlemen. You could be featured in their "Close Encounters of the Kirby/Eisner Kind" series.

Weirdly, CCI says, "This year's book will also salute a number of other comic creators with milestone anniversaries in articles." Um... like who? Tell us so we can write/draw/paint about it, CCI.

Then there's the 50th Anniversary of Batgirl. If last summer's Killing Joke gargoyle-dominated sex scene left you deeply unsettled, this is your chance to reimagine our Barbara in happier surroundings. There's a lot of creative potential for this one, I'd say.

And finally we have the 25th Anniversary of Batman: The Animated Series. Again, this should be a fun basis for creating something - but the trick will be to rise above the pack of Joker and Harley Quinn art submissions. The Ventriloquist or the Clock King would be my choice, but I'm sure you creatives will come up with something novel.

As always, you do not need to be a pro in any sense of the word to submit for the Souvenir Book. Give it a shot. You do need to follow specific formats and requirements, so review this carefully. Then submit your work by 14 April. Who knows - maybe everyone at Comic-Con will be admiring your genius this July.
Posted by Valerie