Yes, you CAN buy that awesome Star Trek art: Interview with Ty Mattson 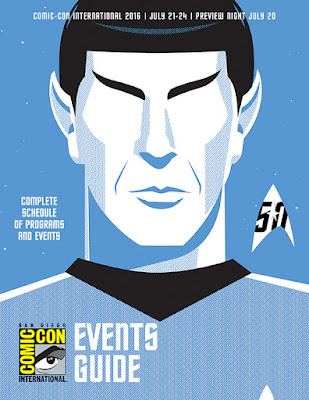 A lot of art swirls through San Diego Comic-Con each year, and much of it is really good. But every now and then some work comes through that makes the community's collective jaw drop. That happened this year with the cover of the Events Guide - an unforgettable image of Spock.

I had to know who was behind it. So I interviewed the artist, Ty Mattson, about his creative process, the Star Trek Art Exhibit coming to Comic-Con and what it's like to design for pop culture giants like Dreamworks, Nickelodeon, Breaking Bad, Mattel and others.  His answers are illuminating for fans and creatives alike. Favorite quote: "The fans are are the ultimate guardians of the brand."

But I know many of you have been wondering about this, so here it is: yes, you can have the above image for your very own. 2 different 18x24 silk-screen prints will go on sale on 20, July, Wednesday on Ty's site: MattsonCreative.com. One is the above art (without the Events Guide, logo, etc) and the other is this: 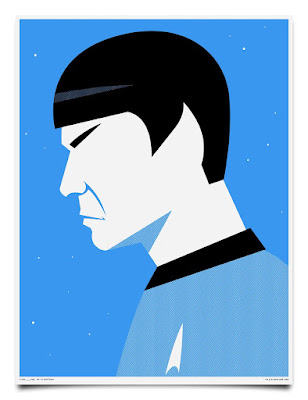 Hi Ty. What can you tell us about the Star Trek art exhibit and your piece(s) in particular? Are you a Trekkie?

The Star Trek exhibit is a global art exhibition to commemorate Star Trek’s 50th anniversary. 50 artists from from around the world were selected to create 2D and 3D pieces inspired by the series.

Spock is an emotionally relevant figure for many nerds - do you personally relate to him?

I’ve never thought of Spock as being emotionally relevant to nerds…that’s interesting. I can see that. For me the relevance is less emotional and more visual. I think Spock is iconic – he represents the entire franchise.

You've done creative work for a lot of brands in the SDCC wheelhouse, such as Cartoon Network, Fox, DreamWorks, Mattel, Jim Henson, Hasbro and Nickelodeon, and shows like Lost, The Big Bang Theory, Dexter, Breaking Bad and others. You also did an officially licensed Star Wars poster series. How nerdy are you and how does that fuel your creativity?

I am a huge fan of the properties that I have been lucky enough to work on. I grew up on pop culture – it had a profound effect on me. My imagination was shaped by the TV, movies and comics that I saw when I was young – and since I was a kid I would respond creatively. I would sit in front of our family TV with a pad and paper, or I would come home from the movie theater and fill sketch books with hundreds of drawings. It’s what I’ve always done, and it’s what I still do today. 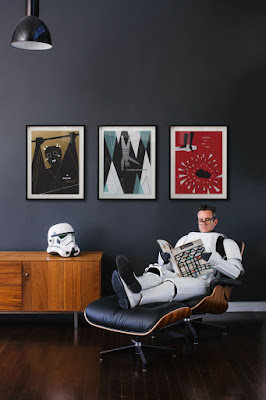 What is it like to create art within the parameters of a well-known fictitious universe? Do you ever run into a conflict between your vision for a character or message, and the standard fan or creator interpretation?


That’s a great question and I think it gets at what I’ve been exploring in my art for the last few years. There are definitely rules. Sometimes you can break them…but you have to break them correctly or else it doesn’t work. I did a series of silk-screen prints for Dexter a few years back – each print reconstructed the story arc of a season visually incorporating details, icons and scenes from the show. The style was very different from the visual language that was typically associated with Dexter, and there was initially some pushback that my interpretation was "off-brand”. However when the artwork was released it was very much embraced by the fans – which is the real test if you’ve got it right. The fans are the ultimate guardians of the brand. When it comes to a well-known fictitious universe, I think that if you can figure out the heart of it – DNA of the story – what makes it unique at a core level, and stay true to that, then the interpretation will resonate regardless of the style.

Interpreting a well-know property is a tricky business though. You’re meddling with something that millions of people hold very dear. So there is pressure there, but it’s nothing like the pressure that I put on myself to create something that is actually worthy of the property itself. In my work I always want to bring something new and original to the table – to interpret the property, not just imitate it. This is a huge challenge as a fan because you respect that universe so much, the last thing you want to do would be to dishonor it with some inappropriate interpretation.

I did a Star Wars series last year where I really struggled with this. I wound up approaching it from a mid-century modern point of view, where I combined my love of modern graphic design with my affection for the original Star Wars trilogy. I thought it would be interesting to answer the question of what a Star Wars poster might have looked like if the movies were released in the 1950’s. You can see them on my site (MattsonCreative.com) and decide if they are successful or not.


SDCC has become a magnet for creatives who are looking for mentors and collaborators, as well as instruction and networking. Do you have any advice for emerging visual artists who are hoping to hook into what is essentially a humming beehive of creative expertise? What about career navigation general - what's your advice for young designers and artists trying to do meaningful work in a competitive landscape? Any guidance on balancing practical & economic concerns with creative ideals?

More good questions! We could talk about this for a long time. But I think the most important thing is to stay in touch with the things you love – the things you’re passionate about. I’ve never really thought about the idea of formal “networking” at Comic Con, I’ve just come down because I’m a fan of this world and I’m enthralled at all of the creativity. I love to be around it.

The best advice that I could give an young designers is to take the initiative. It’s unlikely that someone else is going to hire you to do your dream project. You just have to do it. Regardless if you’re hired or commissioned to do it. The best projects that I have ever worked on were self-initiated. We have unprecedented tools at our disposal in this day and age to share the things we make…so I would encourage younger artists to combine their passion with their talent and explore what that looks like.

Where do you draw inspiration from?

My childhood is an endless source of inspiration for me. Like I said, I grew up on pop-culture and I have vivid memories of my first encounters with films like Star Wars and Superman. Comic books were a big part of that as well. My mom would drive me to the comic book store in 1985, and the artwork and stories from that time made a big impact on me. Experiencing Disneyland as a kid was also something I will never forget, and later in high school I worked in the park because I wanted to be around that creativity.


There were many illustrators and authors that inspired me as well, too many to list here, but books and book covers were important to me. In college I discovered the work of graphic designers like Paul Rand, Saul Bass and Alvin Lustig, and you can see their influence on my work as well.

What will we see from you in the future?

Lots of fun stuff in the works currently on the client-side of things for Cartoon Network, DreamWorks, Nickelodeon, Sony, Universal and others, which will come out in the next year or so. My client work keeps me so busy that it’s actually difficult to find the time for self-initiated projects…but I certainly have a long list of ideas.

Ty will be signing at Acme Archive's booth on Friday from 10 am - Noon and at Cartoon Network from 1 - 2:30 pm. You can also see the worldwide debut of the Star Trek art exhibit 50 Artists. 50 Years during SDCC at Michael J. Wolf Fine Arts at 363 Fifth Ave #102 in San Diego. The exhibit is free and will be open Thursday-Saturday from 11 am - 8 pm and Sunday 10 am - 5 pm. No tickets are needed - you can just wander in.