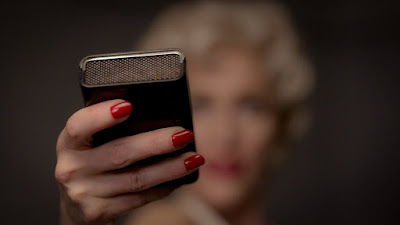 Another overwhelming day in Con land. So what happened?

CCI reminded you that you need to pre-order an SDCC t-shirt tomorrow morning or forever hold your peace.

Star Trek confirmed it's here to colonize Comic-Con with merchandise, art, panels, screenings and more. Panel picks include a Saturday evening NASA panel, a Saturday lookback at the Roddenberry Vault, and a Friday look at science, the Smithsonian and Star Trek. And if you're up for Hall H, you can see Star Trek: Celebrating 50 Years on Saturday with William Shatner, Jeri Ryan, Scott Bakula, Bryan Fuller and others.


Real talk: the ever-multiplying number of SDCC offsites is beginning to exhaust me. Today CCI proudly rolled out a few hundred activities to eat up those days you didn't get a badge for. I can't imagine not seeing something here that will interest you. Fellow space nerds, I will see you at the Hilton Gaslamp to luxuriate in all that VR/NASA goodness.

Your TV girlfriend Gillian Anderson posted a Marilyn Monroesque photo of her character in American Gods.


Destination America's new ghost show is called Kindred Spirits (how is there not already a ghost show with that title?) hosted by paranormal alum Amy Bruni and Adam Berry. It will be featured on a Friday night Supernatural Super panel (I would have named this something else to avoid confusing the easily excited Supernatural fanbase) along with Paranormal Lockdown's Nick Groff and Katrina Weidman, and John Zaffis from Paranormal Collector. Basically, a whole slew of paranormal reality stars, which should please attendees who've been asking why SDCC doesn't have paranormal panels like other Cons.

You can be the first to gaze upon this 13 foot statue of Captain America at the Con before it goes on tour.

The Impractical Jokers have had a decent SDCC presence in the past, but this year they are flying their flag full mast. They'll be at Dick's Last Resort with games and contests, will do a livestreamed episode and karaoke party Thursday night, and spill into Petco Park on Saturday with a rager that includes sumo wrestling, a mechanical bull, a corn maze, music and a brand new episode. And Applehead Factory is bringing you their latest Teddy Scare: a prison bear who's escaped his cell to rampage through Comic-Con. They're giving away one prize a day at booth 4923 too.

Final words: if the glut of Comic-Con announcements is starting to overwhelm you, if you're starting to feel like SDCC is going to be a herculean effort, step back and turn off the information flow for a bit. Comic-Con should be fun, not feel like a job.