Playing by the rules at Comic-Con 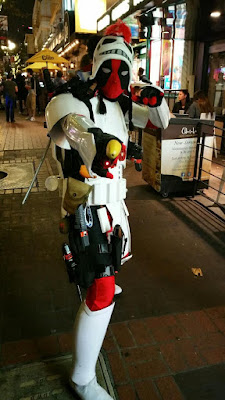 Every year CCI politely reminds us of their rules for Comic-Con - which used to have to do with photography and normal Con-going behavior. But these are modern times and now we have rules about hoverboards and iguanas and funding hustles.

I suggest reading the policies in full (it's a quick read) because it is important to know what you can and can't do. And if your response to these is "duh," remember that you're talking about a huge and eclectic crowd who don't always grasp basic etiquette. I love SDCC attendees - but we don't always think like other people.

No selfie sticks. No hoverboards. No drones, helium balloons or "lighter-than-air objects powered or unpowered," which seems to refer to sorcery.

As much as you want to share Comic-Con with your best friend, no pets are allowed unless they're designated service animals. If you do have a service animal, get him or her a sticker at Disabled Services in Lobby A.

Don't sit in the aisles. I feel compelled to add: don't clog up the aisles with group photo shoots or conversations that go on and on. Take it to the lobby. The policy page says, "Lounges are located throughout the Comic-Con Exhibit Hall" but that is utter hogwash unless they're talking about the concession stand tables. There aren't special areas with couches or anything.

You can't sell anything unless you're an approved vendor. You can't hustle for tips and donations. And if you think you can sneak promotional postcards and handouts onto the Freebies table, you'd be wrong - those have to be pre-approved.

You also can't bring your rolling carry-on in, just like oversized strollers and hand carts are banned. If you're planning on a last Exhibit Hall prowl before going to the airport, have your hotel bellhop check your bags before you until you're ready to leave the area. You also can't bring strollers into panel rooms, but you can park them in designated areas.

You obviously can't record or stream anything, though people do. As a blogger, I am guilty of tweeting during panels, but I do not bust out my laptop or iPad and annoy everyone around me with a giant lit-up screen. I've seen people do this (or just kids playing on tablets) and haven't seen security stop it, but the policies hint this will happen. 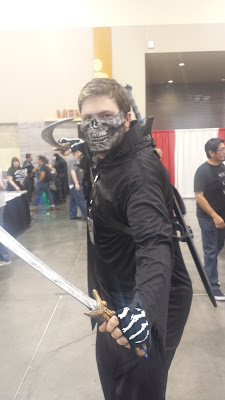 Onto the important rules.

After the recent Phoenix Comicon brouhaha, many attendees feared CCI would zealously clamp down on all cosplay weapons. That is not the case! You still can't bring a "functional prop or weapon" like actual swords, rifles, knives or anything projectile. Cosplay weapons must be simulated AND they must be inspected and tagged at the Costume Props Desks (they added another one) in Hall E and C2.

Oh, and if you're wearing an "oversized costume" you might be asked to leave the Exhibit Hall. Harsh, but understandable. Finally, if you stroll around with an uninspected weapon, especially if it looks real, you'll be frogmarched out.

Once again, you must tap in with your badge and tap out. Fail to do that and you could be denied re-entry. I didn't find this burdensome last year at all (and I was in and out constantly) but other people grumbled about experiencing a few snags.

For those of you waiting for a sternly-worded policy against sexual or racist harassment like ReedPOP has - looks like CCI is still sticking to their boarding-schoolesque "Code of Conduct." It says "Attendees must respect commonsense rules for public behavior, personal interaction, common courtesy, and respect for private property. Harassing or offensive behavior will not be tolerated." And that if you do get harassed, find the nearest security or staff member or headmaster so "that the matter can be handled in an expeditious manner."

LOL, okay. Real talk: read the name off your harasser's badge. It's not always possible (I've never been able to when I've been groped) but it's a start if you want to take it up with security. If you're with friends, a menacing discussion can make the person think twice about doing it again. (If you're a first-timer, by the way, don't get the idea that SDCC is a hotbed of sexual harassment. You will see the occasional article about it, but I feel safer there than I do in a bar, show or crowded festival.)

And if you're one of those nervous people who are convinced they'll be falsely accused just for bumping into someone - it's not likely. People expect to be bumped and jostled. But I will say to use extra sensitivity when asking a cosplayer for a photo. Both male and female cosplayers get groped, there's the always popular "I'll put my arm around you and pretend it's an accident I touched your boob" and then just the reality that you might be hot and sweaty and the cosplayer doesn't want 20 people like you pressing into their costume. Just be polite and ask first, and maintain a decent physical distance.

Overall, Comic-Con isn't a terribly strict place. Be courteous, use common sense with things like massive strollers, reptiles, cosplay props and flying drones over the Hall H line, and you'll be fine.