It's Thursday. Where are we going? 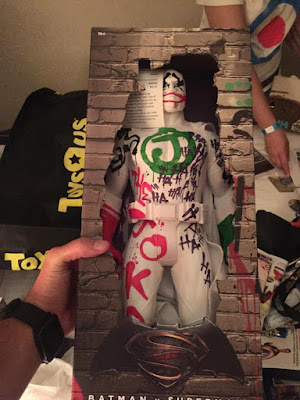 Everyone ready for their first full day of Comic-Con? Let's see what our options are.


This isn't Hall H's strongest day, but it's still got a lot to offer. Dreamworks is at 10, followed by Snowden at 11:45. The afternoon brings Valerian at 1, then Feral Audio Live podcast and geeky festival fare in Under the Radar at 3:30.


Ballroom 20 will probably be a bigger draw. You've got CBS giving you Scorpion, American Gothic and MacGyver from 12-3, then The Strain at 3:15 and Teen Wolf at 4:30. Finally you get to see Luke Cage at 5:45. That's just a good, comfortable TV day.

Indigo Ballroom is more eclectic. Musical Anatomy of a Superhero kicks off at 11, then we have Geek & Sundry at noon, followed by Chris Hardwick's Nerdist Panel at 1. Then there's Comic-Con's HQ at 2. Then the day turns with the premiere of The Good Place at 3 with Kristen Bell and Silicon Valley at 4, then Van Helsing at 5. Finally, we have Comedy Central's Drunk History & Legends of Chamberlain Heights at 6. While all of this is appealing, I think there will be some mass exoduses throughout the day that makes this room somewhat accessible.

Outside the Con, you can catch MAC's release of their Star Trek makeup line at their store, do the Game of Thrones Hall of Faces, or do Syfy's Live from Comic-Con or EW's Con-X. There's also the Adult Swim extravaganza.

But let's look at the "smaller" rooms - some of which have some very big panels. 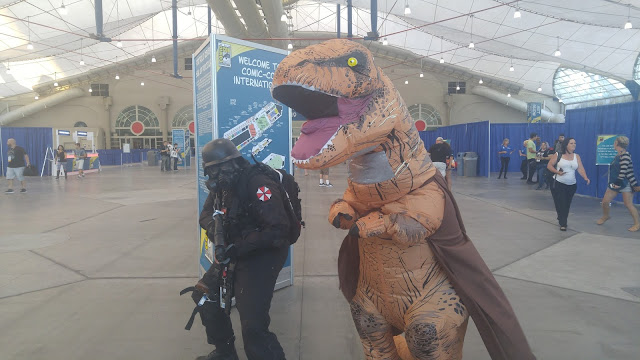 Sure to be popular: Nickelodeon celebrating 25 years of animation in 6A at 11:15 a.m. with talent from Hey Arnold! Invader Zim, The Fairly OddParents, Rugrats, and Danny Phantom.

"Relaunching the Battlestar Franchise" is at 10:30 in 6BCF.

SpongeBob and the Simpsons are at 1 in 23ABC.

The first of several Star Trek panels kicks of:f: the 50th celebration of Star Trek is in 24ABC at 1:30.

The premiere of Falling Water is at 1:45 in 6A if you're in the mood for a pilot.

Arrive early for this: Colony has a panel with cast and creators at 4:45 in 6BCF, followed by the Mr. Robot panel at 6. And the Mr. Robot fanbase is not to be trifled with.

Sausage Party with Seth Rogen is at 5:45 in the Horton. This hasn't gotten much attention but I think it will be fun.


It's a good day for comics and gaming, though not the best day of the Con.

Disney will explain how movies become comics in 28DE at 10.

It's the 30th anniversary of Jim Henson's Labryinth - and a bunch of new books are coming out. Find out about them at 11 in 5AB.

Or you could join me in room 9 at 11 to hear The Hernandez Brothers talk Love and Rockets,

DC wants to give you "all access" at 11:30 in 6DE. You'll find out about Rebirth, upcoming digital books, etc.

You can fight censorship by "Navigating the Power & Perils of Banned Books" with CBLDF at noon in 30CDE. They're also having banned authors do a live podcast in the library at 4.

The "Comixologist Traveling Podcast Party" is in the library at noon. They're also holding an AMA at 2:30 in room 8.

The Joss Whedon fandom society meets at noon in 23ABC.

Grant Morrison is back with another panel on his newest comic involving Indian mythology. Room 24ABC at 12:30.

"Skybound's The Walking Dead" panel will discuss the comic book at 4:30 in 6DE.

"The Core of Collecting" will offer you experts from Dark Horse, LootCrate, Gentle Giant and more.
5:45 in 6DE.


We can also get scientific on a variety of fronts.

Don't forget the VR Con over at the Hilton Gaslamp.

You can also listen to IDW & the Reuben H Fleet Science Center explore the intersection of comics and science at noon in room 9.

How do you make science plausible in the Hollywood world? That's in room 8 at 1:30.

Then there's more VR wizardry is in "State of the Holodeck" at 2 in 32AB. Expect this to be super popular.


Cosplayers have a few panels on deck.

Beginning cosplayers may want to attend "Cosplaying 101" at 11 at the Marriott. Others can find out about foam costume and cosplay fabrication at 2 in the Marriott.

The 501st Legion explains their costuming brilliance at 8 in the Marriott as well.

Like every SDCC Thursday, there is a motherlode of creative panels.

Aspiring bloggers, podcasters & others can find out how to be a "Master of the Web" at 11 in 7AB.

Brian Haberlin helps you turn your idea into a graphic novel at 11:15 in room 2.

You can also find out news about Capcom Pro Tour news and "Street Fighter Nation" at 11:45 in 6BC.

Or you can firmly launch yourself into the comics industry by going to room 28DE at noon. If you miss this one, you can learn how to break into Marvel Comics at 1 in 25ABC.

Become a pro at noon at pitching and development in "The Pitching Hour" in 7AB.

"Art as a means of reaching hard-to-reach kids" will be at 12:30 in room 2. This includes special needs kids and those who are at-risk and incarcerated.

Balancing creativity with comics industry realities: talk about it at 12:30 in room 4.

"Digital Color for Comics" is at 2 in 30CDE; also at 2 is "Comic Book Women: Understanding Coloring and Letting" in Comics in 28DE.

Important: Financial smarts for creatives is at 4 in the Marriott.


We also have quite a few panels on nerd culture.

Want to start the Con on a healthy note? Go to "Nerdstrong" at 10 in the Marriott Marquis. Then you can teach your offspring to be "Self Confident and Successful" at noon in the same place.

"Geek Cosmetics" is a thing, and some of its stars will explain why at 1 in the Marriott.

The year 1986 is explored for its movie magnificence at 3. room 5AB.

"Fandom Diversified" is at 5 in the Marriott.

The LGBTQ geeky year in review is at 6 in 28DE.


Then the sun goes down and we have what seems to be the busiest night of the Con.

But outside the Con is where the real action is. Nerd HQ is hosting a party at their home in the Children's Museum, and you've also got the MTV Fan Fest in Petco Park. If neither of those appeal, there's also the Power Rangers party, also at Petco. There's also the Slayer concert and Fatman on Batman with Kevin Smith.

And of course we have the Her Universe fashion show at the Hyatt, Wootstock, the Archer yacht party, and Boom's party and the Rave of Thrones.

Today will be a day and night of hard choices - so choose wisely. Friday will be even more demanding.
Posted by Valerie