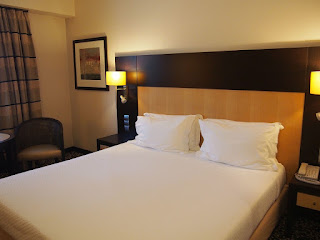 Don't get excited; I don't have wonderful news to report, like a newly discovered downtown hotel.

But I do want to remind you that the deadline for hotel reservation refunds is 2 June, just a few weeks away. "But I thought the hotel reservations would have reopened by now," you might be saying. "I still don't know if I'm going to keep this room." To which I'll respond: Yes, and you'll probably keep waiting on that.

From CCI support today: "Once OnPeak has gone through the wait list for hotels, there will be another sale posted on our website. Unfortunately there is no time frame for that at the moment."

That must be some wait list! Or rather, that must be some backlog of spare hotel rooms to assign. Except there isn't, so what's the hold up? We know a lot of people need rooms. Is CCI just waiting until after the deadline to see who else will give up a room? Maybe.

At any rate, there's supposed to be another sale - and who knows what it will look like; maybe it'll be just the reopening of the reservation system like usual, or maybe CCI will surprise us with a select few package deals offering hotel rooms AND badges, as they've done a few times in the past. Either way, we all know there aren't going to be a new batch of downtown rooms for everyone.

I wish CCI had come out and said "The reservations won't reopen for a while" back in April, because it's now been over a month and I think some people have been counting on that when they could have been looking for a room on their own. But mostly likely they didn't know, since it sounds like it's OnPeak's ball game right now. And I'm guessing the majority of people have turned to Airbnb or other solutions by now. This is my first time ever (since my first year when I booked the Comfort Inn the same day of my arrival - ah, those utopian Comic-Con years) that I have not booked my room through CCI's system.

Seems crazy, but June is right around the corner. You may need to start making some hard final decisions on where you're bunking this year before the clock runs out.
Posted by Valerie