ECCC accused of an offensive badge? Say it isn't so. 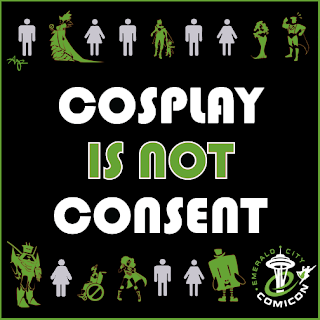 If there's a Comic Con that's the poster child for being sensitive to harassment concerns - sexual harassment, gay-bashing, sexism, transphobia, racism, you name it - it would be Emerald City Comicon. So imagine the cries of outrage rising up from Twitter over the Sunday ECCC badge, below.

Yes, it shows a woman looking horrified as a monstrous clawed hand descends on her shoulder - and while that might not indicate any kind of sexual assault on its own, the need to have her shirt unbuttoned and coming down to show her bra is pretty suggestive. So more than a few attendees have protested. (Consider also that Sunday is Kids Day and it's just a bad image choice all around.) 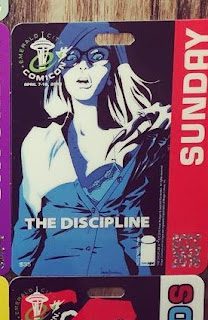 I really didn't notice the badge when I saw the whole group on ECCC's Tumblr, and I didn't get a Sunday badge, so this is the first I'm focusing on it. I agree that it wasn't the wisest image they could have chosen, partially because it's presented out of context - as ReedPOP acknowledged in their official statement on the kerfuffle:

"We are aware that some Fans are uncomfortable with the art depicted on the ECCC Sunday Badge. The art on the Badge is from the Image Comics' series The Discipline. Within the context of the comic, it is understood that these images do not depict non-consensual acts or sexual assault. Without that context, such as on the face of a Sunday badge, that is not clear."

I'm sure some people are reading this and thinking, what's the big deal? One reason: violence in comics (and other art forms) is often sexualized when the victim is a woman. She's not just stabbed, she's stripped first with a special panel to show the readers that her underwear is this close to coming off. This has gotten called out quite a bit in recent years, and it's improved somewhat in my opinion - but still, readers who have no problems with nudity or sex in a positive or egalitarian context are sick of comics that present the suffering of women as sexy. So when an image like this is shown, with no explanation for people who've never even heard of The Discipline, hackles get raised.

And also, these badge images from sponsors weren't just plucked at random. Out of all the Image comics in existence and all the beautiful art inside them, someone thought this image was ideal for the Sunday badge. And there was probably an approval chain to boot, because I've never yet seen an organization that didn't have to discuss every creative decision to death. I doubt the team involved realized the image would offend some attendees, but that's kind of the point; industry professionals still make tone-deaf blunders like this.

Anyway. Maybe you like your Sunday badge just the way it is; the 4-day Monstress badge is still my favorite. But if you do want a new Sunday badge, you can exchange it at ECCC Will Call that Sunday, according to ReedPOP.