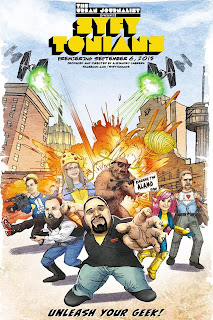 Do you live in Austin or San Antonio? If so, you might want to clear your schedule tonight and head to the Alamo Drafthouse Cinema to see Syfytonians, a documentary about San Antonio's comic book/nerd culture and the swift rise of Alamo City Comic Con.

ACCC (11-13 September) does not get a lot of attention in the larger Con world. So here are a few facts about this Comic Con:

In other words, it's not surprising that someone made a documentary about ACCC. That someone is Alejandro Cabrera, an ACCC attendee who looks at both the local comic book subculture and how Alamo City Comic Con has fostered a community.

Is this interesting to non-Texas nerds? I'd say yes. Not to get all Jane Goodall, but the rise of Comic Con popularity - not just SDCC and New York but the general global spread - says a lot about our social and emotional direction in the 21st century. Comic Cons are booming in Moscow, Brisbane, New Delhi, Shanghai. It's not just the mainstreaming of superheroes and nerd life, it's not just a few thousand superfans dressing up. A persistent and widespread hunger is driving the growth of Cons, which means people are finding something in them that they're not getting anywhere else.  So any film or book that examines that phenomenon should impart at least a few insights.

This particular documentary premieres tonight - but if you aren't anywhere near Texas, you'll be able to catch it online in September.

I'll be attending ACCC weekend after next, so stay tuned for more coverage and interviews. And if you're thinking of going yourself, tickets are on sale online until 4 September.