What did you think of Thursday? 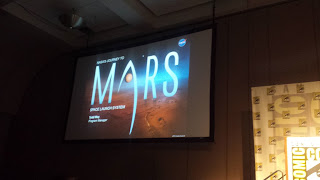 So how was everyone's Thursday? I did Grant Morrison and 2 NASA panels; here's a brief summary if you're interested.

Grant Morrison and Stan Lee are both participating in a new digital project involving Humble Bundle. You pay what you want for their new digital comics and some of the proceeds go to a project called Girl Power (very 90s) that helps empower young girls in India. And Grant's comics are in fact based somewhat on Indian mythology - not The Adventures of Ganesha or anything like that but more of original stories with Indian themes.

He expounded quite a bit on the nature of consciousness, creativity ("When two ideas come into contact, they can fight each other, flee from each other or fuck each other") our quasi-erotic relationships with our smartphones, the popularity of Avatar (which he described as a movie about a colonialist white guy coming in and telling people what to do), and the ability to be a real superhero by helping others. He also seemed to have specific feelings on woman warriors which I didn't quite agree with, but he closed with, "It's time to let the girls rule because the men have had it long enough and they've fucked it up." So, you know, it was a Grant Morrison panel.

NASA's panels on Turning Science Fiction into Science Fact and Journey to Mars were both phenomenal.  We saw clips from The Martian and the For the Love of Spock documentary; we spoke to various astrophysicists, rocket scientists, astronauts, the producer and author behind The Martian and even Victor Glover, who is expected to be the first human on Mars. Exoplanets, alien life, alien oceans, terraforming, hoverboards - it all got discussed there in 6BCF.

Leonard Nimoy's son Adam (who looks a lot like his father) discussed the hold both Leonard and Spock had on fans and in particular focused on the appeal of Star Trek and Spock. He pointed out that Star Trek had a message of good will and positive exploration that people found inspiring; he also thought fans enjoyed seeing a nerd/geek look cool and in command, as Spock did. 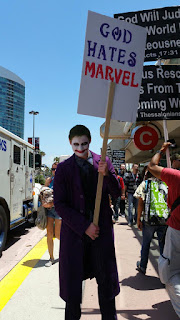 Onto Hall H. People came and went, as predicted. Some of the panels had empty seats. But the Hall H line for Friday was its own entity. Various estimates were tossed around but on the whole anyone monitoring the situation knew when they had to line up.  Most of the people I talked to were planning on getting a wristband and leaving, rather than camping overnight. So while yes, a certain fortitude was required for Hall H on Friday - it wasn't insurmountable in my mind. Not even close.

And that's all I saw today, beyond the Adult Swim area and part of the Conival. Tomorrow will be a more diverse day for me and I'm guessing for many of you. I'll report back on my findings.