How to get a badge for San Diego Comic-Con 2016 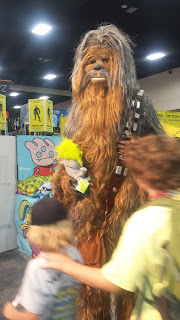 There are 3 groups of people in the world right now:

There is no other group.

If you're in group #3, you might be wondering how you can become a 2016 attendee. It all seems so mysterious and impossible, doesn't it? But it isn't - not really. It's just difficult.

Here's what you need to do.


At least, that's the current state of affairs. CCI could change up the whole shebang next year. But they probably won't alter the process too radically.

So it's simple, on the whole - just not terribly likely. Be prepared for the fact that you probably won't get a badge, or at least not the badge you want.  Do not try to buy from a scalper or from any of the numerous online ads promising badges. Those are scams. If you see talk about "Pre-registration," ignore it - it only applies to current attendees so you won't be able to participate.

In the meantime, read up on the blogs, read my SDCC FAQ and try to gain a realistic understanding of what Comic-Con really is - it's not all zany costumes, glittering premieres and friendly celebrities like they show on the news.  You might also attend some smaller Cons if you haven't already. Salt Lake, Emerald City, Denver, Boston - there are a lot of great Cons out there that have a lot to offer fans. It's not SDCC vs Mediocrity, I promise you.