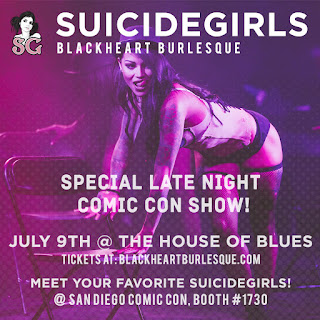 Want to do something really fun at Comic-Con?

How to enter the Blackheart Burlesque Contest

Method One: I'll be tweeting an official Blackheart Burlesque contest tweet on Sunday, 14 June. Anyone who RT's will be entered into the contest.

Method Two: If you don't have a Twitter account, or you're just embarrassed for your friends to know how much you love tattooed women and nerd burlesque, you can email sdccguide@gmail.com with the subject line "I have a black heart."

Who can enter: Anyone who's 18 and over. You don't need a SDCC badge for this performance. 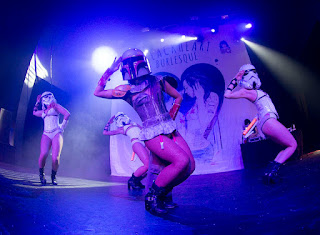 If you're only familiar with SuicideGirls as models, they are in fact world-famous performers who sell out burlesque shows all over the planet. Their exclusive SDCC performance has been revamped and re-imagined for the Comic-Con audience, with striptease numbers filled with pop-culture references from Star Wars, Harry Potter and more. They're calling it a “geek fantasy spectacular," which sounds about right since it was designed by world-renowned choreographer Manwe Sauls-Addison, who has worked with Beyoncé, Jennifer Lopez, and Lady Gaga.
What: SuicideGirls Blackheart Burlesque

Where: House of Blues in San Diego 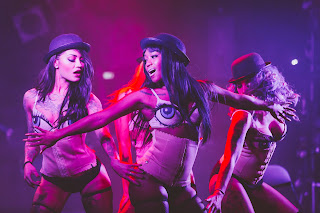 Allow me to point out that Hall H on Friday is going to have Star Wars and probably Game of Thrones and Walking Dead too – so consider taking in the show before settling down for the long haul in line. At least you’ll have your burlesque memories to keep you warm in the damp San Diego night.
Tickets are available now at BlackheartBurlesque.com.