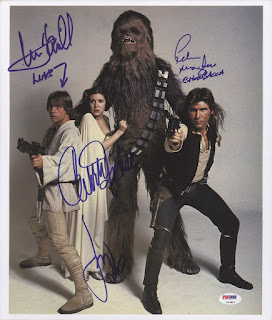 Of course you do. It was signed by the original 1977 stars - that would be Harrison Ford, Mark Hamill, Carrie Fisher and Peter Mayhew - and it's worth 1,000. But of course the coolness of it is what matters. It's a Star Wars photo signed by Chewbacca's hairy paw! And the signatures have been certified authentic by PSA - which, if you didn't know, is the world's largest trading card, autograph and memorabilia authentication, grading and certification service.

You can enter the contest online now. The drawing will happen at PSA booth #5617 at San Diego Comic-Con. You don't have to be present for the drawing, but you'll want to swing by the booth anyhow since you'll get a free PSA-certified Star Wars trading card and a complimentary special edition of SMR magazine with stories about Star Wars collectibles. Authentication experts will also be at the show every day to provide autograph certification services. 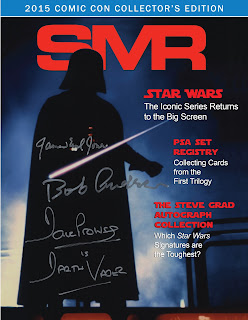 Pro-tip - while the official programming will start being published in late June, now is a good time to start making a list of all the booths & vendors you want to visit. Sometimes you see a collectible or gizmo that is so up your alley you're convinced you'll remember it once you're there - but in fact the Exhibit Hall tends to blow all months-old information right out of your mind with its bombast and glory. Even if you're not a list person, it's a good idea to track somehow the announcements and products that matter to you.﻿
Posted by Valerie