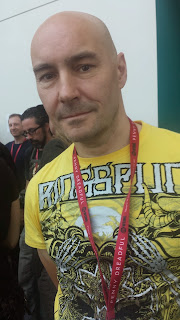 Let's just get down to it. Below are just panel highlights; there are far more that I didn't mention here, so check out the entire list.

Ballroom 20 kicks off with one of the top panels of SDCC: Captain Kirk himself reading from his autobiography. Then it's colonized by CBS with Limitless; Scorpion; Extant, The Zoo and Under the Dome. That's followed by Sherlock at 3:45, then Teen Wolf at 5 and then the Hall H and Ballroom 20 panel playback.

In the Indigo Ballroom: Grant Morrison at 10; Pixar at 11; Voice actors teach their craft at noon; you can visit with Geek and Sundry at 1, then there's the new TVland at 2. Annual Musical Anatomy of a Superhero is at 3, Comedy Central's Moonbeam City is at 4, followed by First Look at Crackle's Super Mansion and finally more Comedy Central with Drunk History and Another Period at 6.

That's a very mixed day in all 3 rooms, so expect to see the crowd flowing in and out.

Grant Morrison kicks off the day at 10:00 by discussing his latest project, 18 Days: The Mahabharata. He's also going to make an announcement on a "groundbreaking, mythic/sci-fi project" with Graphic India. In the Indigo.

Joe Phillips will talk about his long comics career, the LGBT nerd community, and his new character the Midsummer's Knight. 11:30 in room 4.

The CBLDF has a panel at noon on free speech in 30DE, followed by a panel on the banning of diverse books at 1. Then at 4 they have a podcast with banned authors in the library.

Comics for Impact: STEM Education is at noon up at the library.

Dark Horse Presents is also at noon in 23ABC. Later at 3 they get literary in 23ABC with The New Mainstream.

Remember when Oni Press opened up submissions a few months ago? They'll have a noon panel about that in room 9.

Skybound is also at noon in 7AB, as is ComiXology's podcast panel at the library. ComiXology also has an Ask Me Anything at 2:30 in room 8.

Boom! talks about editing comics at 1 in 28DE.

Kelly Sue DeConnick and Matt Fraction have a 1 pm panel in the room 2.

Image has what will be an incredibly packed panel at 2 pm in 23ABC. Chip Zdarsky, Marjorie Liu.

If you want to explore the Female Gaze in Manga, report to room 29AB at 3.


The Buffy Effect: Teen Heroines Then and Now. Apparently the legacy of Buffy is "strong and snarky female characters who are not the sidekicks." I honestly can't remember the pre-snark era. 10:00 in 28DE.

The Wrath of Con Bloggers will talk SDCC blogging at 10 in 14 A.

This should be lively: a Battlestar Galactica panel at 10:30 in 6BCF that will include BSG videos and a discussion of the BSG future.

Call of Duty Black Ops III Zombie World is at 1 in 6BCF.

Geek Fashion will show you how to be a stylish nerd at 1 in 14A.

Mattel and WWE return at 1 in 5AB, with guest appearances and sneak peeks.

Resurgence of Science Fiction is at 1 pm in 32AB.

Building the Holodeck is at 2 pm in 32AB; "how recent developments like Oculus Rift headsets enable the holodecks of today." Then NASA comes back at 4:45 to talk about turning science fiction into science fact in 6BCF.

Terry Brooks will talk about Shannara at 3 in the Horton Grand.

Then the Con gets scary with Ghost Asylum at 4 in 5AB, while Horror and Thriller Authors in Discussion are in 25ABC talking about "what motivates them to scare you."

Discuss fitness, cosplay and body image in NerdStrong at 4 in 14A. Or you can discuss Star Trek love in 23ABC.

Is fandom your fandom? Discuss the evolution of fan creativity at 5 in 14A.

Talk female villains in The Most Dangerous Women at the Con at 5 in 25ABC.  Sense8, which has been causing a lot of talk, is also at 5 in 5AB.


Creative panels. Lots of these today.


Maxwell Alexander Drake is back with his amazing name and his advice on the axiom Show, Don't Tell.  10:00 in Room 2.

Douglas Neff tells you how to turn your creative dreams into reality into From Fan to Creator. Also at 10:00 in 23ABC.

How to Get News Coverage: various creators and journalists discuss the art of stealing the spotlight. 10:30 in room 8.

David Aja is at 11 in 32AB talking about building comics.

Whether you manage talent or are a creator yourself, this should be useful: Nurturing Talent: What It Takes To Be a Decision Maker. 11 in 29AB.

As should this: How Creatives Are Using New Means to Connect With Their Audience.  11 in 7AB.

Kelly Sue DeConnick is at 11 am in Room 2, with a two-hour writing workshop.

Want to break into comics? Find out how at noon in 28DE. You can also get Marvel's spin on this at 1 in 7AB.

The Pitching Hour is also at noon in 5AB: making your way "through the creative battleground of the entertainment industry."

The Comics Creator Connection panel is at 1:30 in room 8. This is not the actual event where you look for collaborators, but an opportunity to hear success stories and get prepared for your own participation.

Are you a fanfic practitioner? Report to the Horton Grand at 1:30.

Greenlight Your Passion Project is at 2 pm in 7AB.

Visual artists will like this: Digital Color Comics at 2 in 30CDE.

Learn how to build worlds at 3 pm in 25ABC. Moderated by Charlie Jane Anders, who's joined by authors. I bet this will be packed.

You can also find out how about "Making the Leap to Creator-Owned Properties" at 3 in 28DE.

Another writing 101 panel is at 3, this one from Marv Wolfman. Writers have the best names. 30CDE.

A specific panel on TV kids' animation is at 3:30 in 24ABC for those of you who want to break into the biz.

Find out how you can make a living as a comic book artist at 4 in 30CDE.

Not just for LGBTQ: Writing Transgender Characters is at 5 in 28DE.

Then the sun goes down and we have...

NASA talks about our upcoming voyages to Mars, including in the context of The Martian. 6 in 6BCF.

Vertigo talks comics at 6 in 5AB.

This should be contentious: a panel on geek ethics, from Gamergate to the Hugo Awards. 6:30 in 24AB.

A panel called So, The Internet Ruined My Life is at 6:30 in 26AB for people who have "experienced the wrath of the Internet firsthand."

Geek and Sundry has a trivia game at 7 in 23ABC.

PodCRASH with Chris Gore will be at 7 in 25ABC.

The Cartoon Network Adventure Time Royal Ball is at 8 in 7AB, with the world premiere screening of We Bare Bears.

Nerdist Comics is also at 8 in 23ABC.

If you like telling stories about aliens, or just want to know what to expect when they arrive, Alien Civilizations is at 8:30 in room 8.

And finally, a special screening of Spirited Away is at 9 at the Horton Grand.


So what do we think? I like science and creative panels, so obviously I'm ready to panel it up on Thursday - but this might not strike you Hollywood fans as having the kind of megawattage as Friday and Saturday. Just be aware that smaller panels can be the most interesting ones, and that you really don't want to spend all 4 days of the Con in Hall H and Ballroom 20 anyhow.

Personally I think the big rooms look great for Thursday. But if you don't feel the same, consider making a Thursday a day when you take in 1 or 2 panels, then thoroughly examine the Exhibit Hall and hit some outside activities.