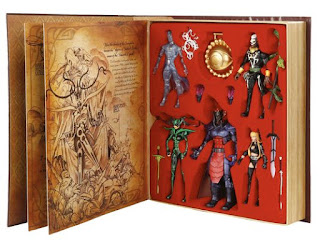 Today wasn't the most exciting day but it wasn't devoid of news entirely. Let's see what we have.


First off, CCI shared a glimpse of Jim Lee's art in their gallery show. They promise to share more art previews leading up to the 20 June opening. My question: will there be an official SDCC t-shirt with some of the gallery art? It seems like there should be, given how proud CCI is of this show.

This is probably my favorite collectible so far: a Doctor Strange box set designed like the Book of Vishanti. Inside are Strange, Dormammu, Brother Voodoo, Magik and Hela. Unfortunately we have to navigate the hellish rituals of Hasbro to get our hands on it. "But maybe Hasbro will be better this year," an optimist might say. To which I say: doubt it.

If you're breathlessly awaiting the next Batman v Superman trailer, the current prediction is that it will be attached to Star Wars in December - with a special teaser for the Con.

Speaking of Star Wars, how badly do we all want to play Star Wars: Uprising? We know Star Wars: Battlefront will be showcased at E3 week after next, so let's hope we can get some kind of Star Wars gaming peeks at SDCC.

We may not get yesterday's R2-D2 refrigerator, but we will have a shot at getting this jumbo R2-D2 from Gentle Giant.

Mission Brewery is hosting Super Video Game Land on Friday, 10 July from 6 pm - midnight. This isn't "just" a gaming event - though plenty of classic games will be available for play - but will also have game artwork and arcade music.

We finally got some Fear The Walking Dead images that weren't just Robert Kirkman scratching his beard on set. And they're... kind of boring. This article goes into the various family relationships and dynamics that will apparently drive the story but I'm hoping they're just saving the apocalyptic thrill kill chaos for an incredibly mindblowing SDCC panel.

And of course some of the biggest news that rolled out today: Marvel is doing a massive relaunch this fall to the tune of 55-60 titles. Officially called "All-New, All-Different Marvel" (hyphens theirs), the relaunch hasn't offered up much detail yet which means we'll probably get a few promotional panels dropped on us at the Con. A special 64-page Previews is supposed to be in comic stores 1 July. 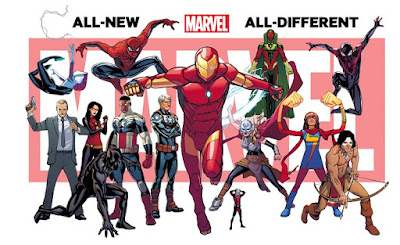