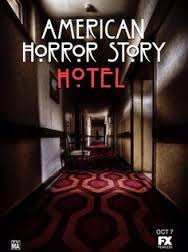 Entertainment Earth has really brought it this year with the Tina Fey/Amy Poehler dolls, Spock swimming with whales and Adventure Time tin. Now they're rolling out a fairly luxe Kiss action figure set. They're all in their iconic outfits, of course, but you also get stick-on tattoos, a mini wireless speaker, album artwork and an animated light-up Kiss logo. This would make a killer Christmas present for the Kiss fan in your life. Or, you know, for yourself.

The American Horror Story panel will share major spoilers regarding upcoming season "Hotel." Here are the cast members you can expect to see: Kathy Bates, Evan Peters, Matt Bomer, Sarah Paulson and Angela Bassett. Yep, that ought to do it. The line will be ridiculous.

And if you're wondering who's going to be at the Salem panel, that would be Shane West, Janet Montgomery, Seth Gabel, Iddo Goldberg and Ashley Madekwe, with producers Brannon Braga and Adam Simon.

If you've been rolling your eyes at the idea of Damien - a show about the kid from the Omen all grown up - you might be more intrigued when you hear it's being produced by Glen Mazzara. Or maybe not. "Haunted by his past, Damien must now come to terms with his true destiny - that he is the Antichrist." This seems to have flown under the radar of the One Million Moms who are currently complaining about Lucifer but I'm sure there's room in their hearts for more misplaced outrage and pearl-clutching.


The Last Man on Earth panel will have January Jones, Will Forte, Chris Miller and Kristen Schaal.

There will be a screening of Sex & Drugs & Rock&Roll, a new FX comedy starring John Corbett, Elizabeth Gilles, Robert Kelly and Elaine Hendrix. It's about a 90s band who broke up just as they were about to become famous and now have to reunite. This will either be one of those surprise SDCC premieres that gets tons of positive buzz after it screens, or it will be branded a miss. There won't be any middle of the road on this one.

On the event side of things, Being Geek Chic and The Nerdy Girlie are hosting a Geeks Go Glam party on 9 July; that's on a Thursday so hopefully your feet won't be too busted from the Exhibit Hall by then to walk in high heels. Tickets go on sale Thursday, 4 June.

And for Friday, 10 July we'll have a live reunion Diggnation show - but they need your help to make it happen. Check out the Kickstarter here.


June is just going to get crazier, so be ready.