Is SDCC summer camp for creatives? 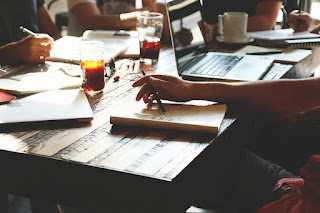 If you're new to the world of Comic-Con, you may have been surprised by the number of creative workshops and panels in the programming.  This is something that's grown over the years, both in breadth and in volume. Whether you're a screenwriter, video game designer, colorist, animator, novelist or makeup artist, you can probably find several panels offering professional advice at SDCC.


Often this leads to a confluence in the attendee mind: they blur the celebrity wattage of SDCC with these panels and think that they're going to meet illustrious movers and shakers who can make their careers happen. They think they can pitch agents and editors, charm producers and generally slide into an industry through a special side door marked "Comic-Con."
Unfortunately, that probably won't happen for you. But it doesn't mean these panels can't be valuable. Here's how to get the most out of them - whether you're starting out or already have a toehold in your field.


1. Look at the panel presenters. Probably everyone there has some kind of respectable credentials or they wouldn't have a panel at SDCC. But it doesn't mean they're top dog in their industry. Every industry has a subset of "experts" who make a brand out of blogging, presenting at conferences and self-publishing. Some got in on the ground floor of the Internet early enough that they created an impressive digital persona that doesn't correlate to their actual ability to sign and close deals. So just be aware that while you may get good advice from panelists, they may not be the industry titans you assume.


2. Be aware that you may not learn anything groundbreaking. We live in a world where a dedicated creator can pick up a lot of tricks and tips on their own from various online forums. You'll notice that many of these panels are 101 and focused on breaking into the comics industry or how to write query letters. That's great for super novices, but not terribly helpful for people who are further into their careers. If you've already done your industry homework, consider sticking to the panels that examine practical matters like legal negotiations and cross-medium production.


3. Be aware when you're getting a sales pitch. Panelists generally don't spend a small fortune to come to SDCC and give panels in the hopes that they'll be inundated with your wireframes and manuscripts to sort through, unpaid, back home. They do it to network, elevate their brand and sometimes to expand their customer base. It's not at all uncommon for a presenter to get  chummy with you and appear interested in your career when really they just want you to become a Facebook fan and buy their books. I see attendees fall for this every year. Last year it was someone thinking a famous writer had invited her out for drinks and career talk; she showed up to find a few dozen people there, fawning over the writer, who didn't acknowledge her.


4. Don't ignore your fellow fledglings. Getting to know the other neophytes in your career can open more doors than you think. One, it's comforting to have friends who understand what it's like to struggle in a harsh industry. Two, they'll often have better advice on advancing today than someone who started out 17 years ago. Three, some of them may become wildly successful down the road. Creative breakthroughs rarely happen in a vacuum so start building your network now. Too many creators view each other as competitors when they should be viewing each other as a community.


5. Don't come with all your materials in hand unless a panel actually requests it - but have a flawless digital game at the ready. Nothing screams AMATEUR like someone who actually shows up with a manuscript or sample pages crumpled and stained from travel. Have some art ready to show on your iPad or phone, and cards that link to your digital assets. But don't expect a panelist or established creator to accept your physical samples and evaluate them. (That said, I have a friend who is gracious about accepting these at his booth and offering feedback - but I've seen people who aren't as kind be quite rude about this.)


6. If you have a question a panelist can't answer, ask where you can get an answer. Sometimes they won't know but sometimes they'll refer you to a good resource or even have someone from their company contact you. Someone else in the room might have an answer for you after the panel.


7. When you do ask a question at the panel, don't dwell on your project. Just ask your question. Writers are notorious for starting out with, "So I'm about 20,000 words into my novel which is about..." and launching into a 4-minute synopsis. One, this is time-consuming; two, it sounds like you're pitching. Often the secret hope is that the agent or writer will say, "That sounds fascinating!" and leap to get you a contract, but trust me, they'll just want you to get to the point.


8. Don't be afraid to take notes. Attendees get embarrassed about this - but if you're hearing genuine pearls of wisdom from the panelists, type away.


9. If you're a writer - and I know you are legion at SDCC - recognize that you will get the real power agents and opportunities at good writer conferences or BookCon. If you're a comic creator, keep small Cons in mind - it's often easier to make connections there than at SDCC. That's on the floor, mind you; if you have access to the right parties at SDCC, that's another story.
10. Creative panels can be great, but in the end they probably won't change your life - so remember to mix in a few fun and frivolous activities and panels too. You're at Comic-Con, after all. It'd be a shame to be so grimly focused on your hot pursuit of FAME that you miss everything else it has to offer.
If you're serious about networking at SDCC, I'd advise reading my 3-part marketing series on events, preparation and soft skills. Be warned, it's lengthy. But ultimately Comic-Con is a great opportunity for any creative, from inspiration to connections. You already have a golden ticket in the form of a badge, so you may as well maximize everything it has to offer.