These last 8 weekends before Comic-Con 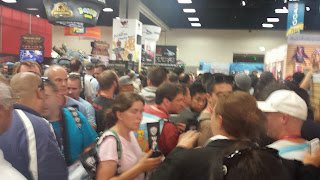 I've known San Diego Comic-Con would kick off on 8 July since last year when I arrived at the Con and saw it in the guide. Usually it comes a little later in the month, but I didn't think the time difference was that big a deal - until now, when it seems impossible that SDCC is that close.

Counting this one, we have 8 weekends before we walk into the convention center. That final weekend is the 4th of July, which means most American attendees will be busy with barbecues, vacation days, fireworks and other celebrations.

Counting backward, we'll probably get programming announcements starting June 25 - I say that, first-timers, because CCI usually drops all the panel announcements day by day 2 weeks in advance. And be warned, SDCC has an insane amount of panels on every topic you can imagine. You'll want to study those lists, as opposed to winging it on arrival, because you'll need to make tough decisions - two of your dream panels will overlap, it's inevitable - and you'll need to roughly calculate your line time as well. This isn't an exact science, but in general you can't count on running from a panel that ends at 3:00 to a highly popular 3:30 panel and expect to walk right in.

So it's safe to assume we'll all be feverish with plans and holiday obligations from the end of June on. Before that, we'll be in the crux of peak announcement time. While lots of exclusives are getting announced now, this is nothing compared to the torrent of exclusives you'll see over the coming weeks. I used to list these; I'm not going to this year, except for top picks. Plenty of other sites cover them exhaustively and CCI does a good job of listing them and telling you which booth they'll be at. And yes, you'll want to note that too. Don't think that they'll catch your eye eventually as you meander around the floor. The crowds are too thick (and your fellow hunters too competitive) for that.

We'll also hear more about events. Parties, bands, cosplay contests, gaming events - there will be many, many outside events for you to attend, whether it's a Geek & Sundry party, an Orphan Black meetup, a nerd fetish ball, a live art show or a Star Wars collectors happy hour. I'll cover the major ones here but there will also be many more obscure ones that only get mentioned in various fan community and music sites - so if you have your hopes set on a specific fandom or type of event, search around as we get closer.

CCI will also announce their outside events. Let me say this here; wandering around, it can be hard to tell which is an official Comic-Con event (open to the badged only) and which is just a company putting on a show for the public. If in doubt, ask. But rest assured there will be plenty for you to do. I can't stress enough how awesome the outside events have gotten in recent years. Adult Swim funhouses, Game of Thrones attractions, Nerdist laser-tag, virtual reality tours, ziplining, obstacle courses - they're endless.

And of course we have Nerd HQ. Once those panels get announced, you'll really want to pay attention. Those tickets go fast fast fast so yes, it's competitive - but they offer opportunities that often surpass the official panels inside the Con.

CCI will also announce things like signing up for Portfolio Review and Comic Creator Connection, and the big companies will offer professional opportunities themselves, like Nickelodean inviting attendees to pitch them on the floor.

In short, you'll want to pay close attention over these final weeks because this is when it gets real. The information that's about to flow your way will feel overwhelming at times, but don't tune it out - you'll miss some of the most exciting parts of the Con. I don't know what you have planned between now and 8 July, but trust me when I say these weeks will fly by and you'll be at the Con before you know it. Buckle yourself in for the ride.
Posted by Valerie