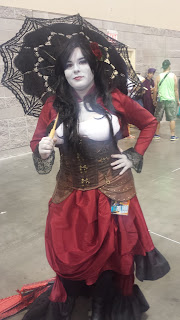 Today was the busiest, boldest day of Phoenix Comicon. It was also the day it became apparent that the organizers had done a very good thing by expanding to another floor of the convention center and surrounding hotels; with the photo ops, writers, signings, panels, car show and other features spread out, the crowds never became totally overwhelming. In fact, the hallway traffic moved a lot faster than it did last summer. On the whole, it was a very navigable day.
I spent most of it inside the main ballroom so I'll report on that. I missed David Morrissey, Summer Glau and Rocky Horror but I did see:
Jason Momoa 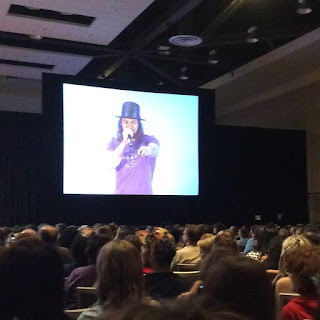 Known for his hulking roles on Game of Thrones, Stargate, Baywatch and Conan, Momoa said at one point that everyone thinks of him "as a big dumb animal" - however the panel showed off his wit and intelligence. It also showcased off his adoring female fans, one of whom gave him a customized jar candle that read "Saint Momoa - Patron Saint of the Lustful." Oh fandom, never change.
Some of the things we learned:
Alyson Hannigan and Alexis Denisof
It's not often you see a married couple having their own panel. Fans asked questions about Buffy (obviously) and American Pie, Denisof being in the Marvel Universe and of course how they fell in love. Things we learned:
Katee Sackhoff 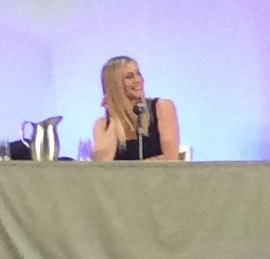 The gorgeous and always candid Sackhoff was highly entertaining. She also had the longest advance lines for questions. What we learned: 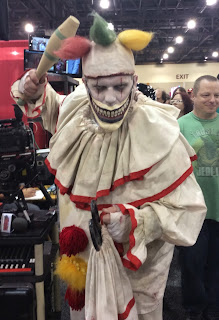 As for the Con itself. Cosplayers brought their A game, like Twisty from thehorrorshowchannel.com. There didn't seem to be as many activities to actually do on the floor as there have been previously. (One simple thing that was kind of incredible: a homemade ice cream booth.) Because the Con was dispersed, it was also harder to run into friends. Some attendees I know skipped most of the day to save their energy for the Red Wedding and other parties tonight. Some friends went to writing and creative panels; reactions were mixed.
Last year I talked to a few artists and writers who'd come to Phoenix under the impression it was a burgeoning Con - a great place to make sales. None of them sold as well as they hoped. Maybe that's why I've seen so few "name" comic creators here this weekend. Of course there are plenty of indie and self-pubbed artists and writers, and some of them have decent fanbases. But overall, it's kind of the opposite of Emerald City, where you can't turn around without stumbling over another comic book supertalent.
If you're going back tomorrow, I'd recommend swinging by booth 15066 and checking out ConQuest. You've probably seen their journals online; designed for Con attendees, they're immensely practical but luxurious and meaningful too. Notes, autographs, sketches, contact information, panel and vendor information - these journals can hold and organize much of your Comic Con existence in something that's beautiful to look at. Below ﻿Ted Thompson is holding Doctor Who and Supernatural journals that were both stunning. I think we've all had the experience of coming home from the Con with random scattered papers and sketches that wind up lost or stashed away; these journals provide a way to contain all of that in one collective keepsake. 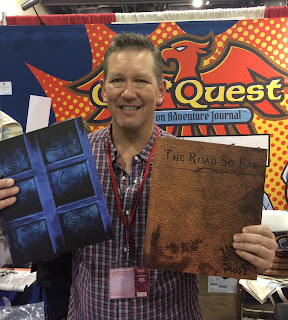 Sunday should be a quieter day, if only because so many people will be sleeping off their wild festivities tonight. The Sunday sales here aren't always as drastic as they are at SDCC and other Cons, but it's still worth taking a final spin through the Exhibit Hall. And of course, there's the big closing party tomorrow night.

I'll close with a word on the heat. I came across one heatsick attendee today and another attendee who was crying and ill and complaining of exhaustion in the restroom; the sun and high temps can do that to you, especially if you're already tired from traveling and general Con doings. So if you're starting to feel physically off, sleep in tomorrow, drink a lot of water and recuperate. Trying to soldier through isn't worth it.