And Phoenix Comicon is over 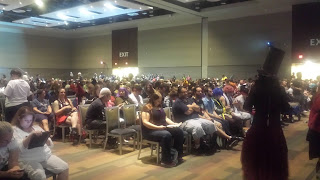 It's Sunday night. By now most of you have returned home from Phoenix Comicon, showered off your liquid latex body paint and settled in for Game of Thrones and Penny Dreadful. Did you have a positive Con experience? Was it worth the travel, if you traveled? Will you go back next year?

I'm stuck on that final question myself. But one thing is undeniable - Phoenix Comicon is getting enough media attention that it's almost guaranteed more out-of-towners will flock to it next year. So let's break down how this Con went and who it's good for.

What kind of Con did we all just have?

A good one. Whether you went for the celebrities, the cosplay or the many events - the parties, the speed dating, the burlesque, the science competition, the comedy shows, etc. - you most likely found something that appealed to you.

The only exceptions to that I might see: attendees who were there for high-powered industry networking (the mid-level networking was good but this can't match SDCC in terms of serious yet accessible influencers) and those who were there for Hollywood trailers and previews. Yeah, you'll have to hotfoot it over to San Diego for that.

But in some ways, Phoenix Comicon offers a better Hollywood experience for some fans. Yes, really. If you like the special guests here - and there was enough of a range this weekend that I think most people found someone to get excited over - you might get a more personal and interesting panel here than at bigger Cons. Often at SDCC or NYCC you'll see your favorite actor sitting at a table and answering one or two questions at the end of a panel that mostly featured footage and a few producers talking. At PCC, it's usually just an open dialogue between that same actor and his or her fans for an entire hour. The panels are more relaxed and often they're more fun.

In terms of infrastructure, I think the organizers continue to do a great job of putting on a big show in a way that feels spacious and smooth. By adding the third floor of the convention center and utilizing more hotel space, the Con made it easy to travel to wherever you needed to be. There were a few areas for improvement that I spotted but overall the PCC team has shown how committed they are to constant refinement - something they told me a few years ago that has proven true. 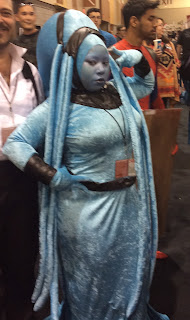 Who belongs here?
I'm going to say a cautious "almost everyone." I've always found this Con to be very young (as in a teeming mass of adolescents) but this year I saw a greater mix of ages. One 60something person told me bluntly that SDCC is too much at his age - by which I think he meant the walking, the waiting in line, the sheer exertion involved - and that he likes PCC because it's just more accessible with fewer lines. My friends who took young children had an easy time getting out of there or getting some space when their kids had a meltdown, and it was easier for them to quickly get food and generally control their environment. Conclusion: anyone with mobility issues, physical constraints or other challenges may find PCC (or other smaller Cons) a more manageable experience.
I'd say this Con is going to appeal the most to young locals because it provides a ton of fun events in an otherwise somewhat boring city. (Sorry, Phoenix.) Cosplayers will like it here. Social nerds will too. Someone who's never been to a bigger Con will probably enjoy the spectacle of the Exhibit Hall and some of the niche panels.
But hardcore comic fans and seasoned Con attendees? I'd only advise they attend if they're within a few hours' drive and have an open weekend. I would not recommend anyone get on a plane for this - especially if they're hoping to find San Diego Comic-Con circa 20006 or New York Comic Con circa 2012. The experiences just aren't comparable in terms of the talent present and offerings available.
Or to put it another way; I ran into three high school kids tonight (still in their cosplay) who were thrilled because they got to hug some famous person. It wasn't even a name I recognized but it was like Zeus himself came down from the heavens and showered gifts upon them. Then I got a grumpy email from a 3-time SDCC attendee who was utterly disgusted with the panels he attended, calling them a joke and a waste of time. I could see the merit of both reactions - it all depends on your expectations and background. 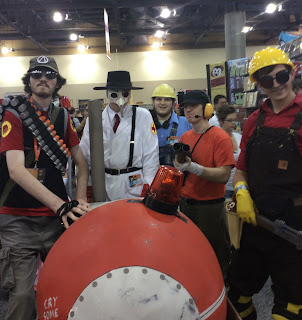 As I said the first day of the Con, I think the guest and talent caliber will continue to rise. (It's already pretty impressive.) But I see this as settling into a celebrity-and-cosplay Con, with the fine arts represented mostly by the local community. That's not bad; given the relative proximity of Salt Lake Comic Con, Denver Comic Con and WonderCon, there are enough options that any out-of-town attendee should be able to find the right Con for them. That's the great thing about the growth of the comic convention scene; each show is taking on its own distinct personality. And I'd say Phoenix Comicon's personality is appealing for a huge number of people.
Until next year, Phoenix nerds.
Posted by Valerie