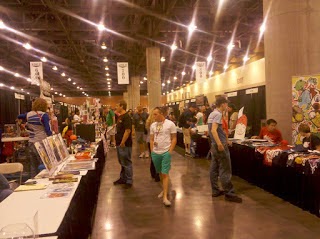 Happy Phoenix Comicon! It all kicked off today but tomorrow is when people will really start pouring in. The number of panels, events and signings is mind-boggling; I would highly recommend looking through them now and not waiting until you get there. There are just too many decisions to be made.

The panels and offerings are so diverse that it's hard to fit them into Hollywood, Comic Book, Gaming and Collectible tracks like you can at most other Cons. It's also clear that they'll appeal to a wide range of attendees, from teenagers trying out their first cosplay to middle-aged novelists to hardcore Whovians. So with that rampant subjectivity in mind - here are my top picks.


Katee Sackhoff. Star of the recently controversial Power Ranger fan short film, and Starbuck forever in our hearts, the mesmerizing Sackhoff is going to ignite the Con. Mary McDonnell and Edward James Olmos should also make this a weekend of joy for Battlestar Galactica fans.

David Morrissey. The Governor is coming to Phoenix and he may or may not wear his eye patch. Half the Con will try to get into this.

Jason Momoa.  Horse lord. Aquaman. Conan. Can we sit on his lap for photos during his signing sessions? Probably not but I bet women will ask.

Max Brooks. If you haven't read World War Z yet, add it to your summer reading list - and pick up his Harlem Hellfighters too while you're at it.

Tribute to Leonard Nimoy. Vulcans and Romulans alike will pay their respects in what will probably be one of the more emotionally gratifying parts of the weekend.

Kelley Armstrong. She's here to promote newer work and not her Women of the Otherworld series but book and Bitten fans will pour in to see her.

Diana Gabaldon. Ditto for the mind behind the popular Outlander show.

Geeky Things to Do in Arizona/Haunted Phoenix. Year-round activities of every stripe for geeks of every age. Some paranormal.

The Diversity Lounge. It's pretty cool to see geekdom not only recognize people of color, people with disabilities and the LGBTQIA crowd but to actively incorporate those perspectives into events and art.

Inside NASA. This will look beyond the space exploration program at NASA's other projects.

Alyson Hannigan and Alexis Denishof. Buffy fans, Angel fans, American Pie fans - maybe HIMYM fans if they exist - should be pretty excited about this pairing. Charisma Carpenter will be afoot as well.

The Red Wedding Party. Game of Thrones fans can dress up and attend a party that's a benefit for Kids Need to Read.

Rocky Horror Picture Show reunion. Magenta, Brad and Columbia will reunite in one fascinating panel; then they'll join local shadowcasters for a screening of the movie Saturday night.

Talk Nerdy to Me Burlesque. Multiple troupes are performing. This is traditionally a sold out show - so reserve a seat if you're interested.

The Fright House. Haunted House lovers don't have to wait for October to get a good scare.

Experiencing Phoenix Comicon. This is something probably every Con should do - an orientation of sorts that helps people make the most of their weekend.


I'd be remiss if I didn't also note that there are innumerable Doctor Who panels, countless writing panels and creative workshops in general for cosplay, makeup artistry - pinup and zombie - photography, film and video, and a film festival schedule that is staggering in its lineup.

Check it all out here. And remember, some day badges are left but they're going fast. If you want to talk your friends into going this weekend, now is the time to make your case.