And the advent of scammer season is upon us 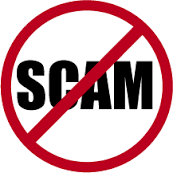 You know spring is almost here when Craigslist starts filling up with sketchy ads for overpriced SDCC badges and hotel rooms.

They're out in force already: those people offering single day or Preview Night badges for hundreds more than the official purchase price. They know there are a lot of people still reeling from their Open Registration failure and they're ready to move in for the kill like some kind of fraudulent funeral salesman.

They'll tell you usually that they'll give the badge to you at SDCC or they'll tell you what kind of fake ID to prepare (what name and address and birthdate) to match the Member ID that goes with the badge. Or they'll tell you they work for a studio, comic book retailer or other organization with guest badges to spare, and they can sell you one to be picked up at a special desk.

While a small percentage of these people are legit - legit in the sense that the overpriced badge will get you inside - most are straight up liars. This is the Nigerian prince's SDCC cousin. Don't let your Comic-Con emotions trump your good sense here; in most cases you will be flushing your money down the drain and making a disappointing situation much worse.

Of course, many of you don't give a rat's ass what kind of devil you have to deal with to get into SDCC - so here's what you need to know:

In the end, all I can say is please, please, please use your common sense and don't jeopardize your wallet or future ability to go to SDCC. It really isn't worth it. If you try a backdoor route into Comic-Con, you need to make very sure you're dealing with someone on the up and up. And for those of you who are about to send me nasty comments telling me how trustworthy and noble scalpers are - your very defensiveness is indicting.