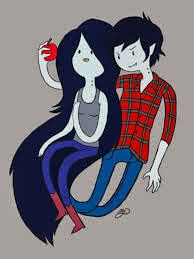 Does anyone else feel overwhelmed by the sheer number of events and promotions this year? It's almost numbing at this point. Like I love Adventure Time, especially Marceline/Marshall Lee, but there's no way I'd have the patience or energy to complete their Exhibit Hall scavenger hunt, aka the Adventure Time ConQuest.

But maybe you will. By participating, you'll get "secret text-messaged clues" to visit any of the 11 participating partner booths and locations listed below - or you can visit the Cartoon Network booth (#3735) and look for signage to get started. As you go, you'll get incentives, premiums and rebates for some Adventure Time products.
If you complete the quest, you can claim your reward - and uber ConQuesters who earned their Jake and Ice King medallions in 2012 and 201 can bring those to The New Children’s Museum redemption center to earn a triple threat reward. I don't know what those are, sorry. But it sounds like this is an excellent way to pick up discounted Adventure Time stuff either for you or to do some early Christmas shopping for the kids in your life.