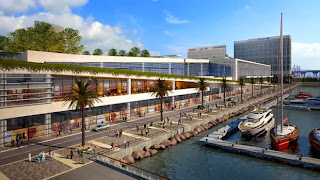 
While CCI and EPIC futz around with the pre-registration system, other Comic-Con players are moving briskly ahead; namely attorney Cory Briggs, who's filed a new lawsuit asking for the reversal of the California Coastal Commission's approval of the expansion plan.

I say "new" because he already has one lawsuit gumming up the works, that one challenging the project financing. This new lawsuit states that the $525 M expansion doesn't comply with the California Coastal Act and a consistency certification relating to the rooftop park is not legit.

Why he cares: he represents the San Diego Navy Broadway Complex Coalition, who has a keen interest in waterfront doings.

What the repercussions could be: getting a court order to stop all action on the expansion.

This article lists the various legal thrust and parry of his arguments, if you care to read them. Should we be worried? I doubt it. The expansion plan has too much municipal might behind it at this point. For now, let's call these lawsuits the death rattle of the opposition and assume the expansion will go ahead as planned.