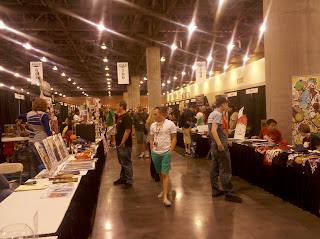 Yes, I know you want news on San Diego Comic-Con. Trust me, in a few weeks, this blog will be a torrent of Comic-Con information. But right now we're going to look at a smaller Con that's becoming a popular alternative for people who can't/won't go to San Diego.

That would be Phoenix Comicon, and it's Memorial Day Weekend. This Con has been rapidly growing into a major destination for people all over the country; 3 years ago, attendance was at 14,000 and this year they're expecting between 40,000 to 45,000 unique attendees. Last year it brought in $1.5 million to the local economy. But while it’s growing exponentially, PCC is not a microcosm of San Diego Comic-Con – nor does it want to be. I sat down with Jillian and Bry Squires from the staff to talk about why smaller Cons are getting so popular, the unique benefits they can offer fans, and how Phoenix is learning from San Diego’s mistakes.

Here’s what I discovered about Phoenix Comic Con and smaller Cons in general. My apologies for the novella.

At SDCC and many of the other big cons, most attendees are doing one of two things: walking the aisles of the exhibit hall or sitting in a panel. Yes, there’s gaming and other activities, but most big Cons deliver to attendees who sit back and passively absorb the experience.

At Phoenix, the framework is far more participatory. In addition to events like Geek Speed Dating, the Talk Nerdy to Me Burlesque, Monster Bash, Zombie Beauty Pageant, Steampunk Science Fair and Ball, Dr. Who and Babylon 5 parties, fans can play a collaborative role in the Con structure, such as the Star Wars fans who are creating “The Tatooine Experience” in the Exhibit Hall for other fans to enjoy. “We definitely have the potential for the kind of fan integration you see at Dragon*Con,” says Bry.

Social media is driving it.

While the bigger Cons have dialed up their web presence in recent years, it seems more obligatory than enthusiastic. Smaller Cons, on the other hand, tend to be driven by social media conversations and in turn, promote through those dialogues.  “Especially with social media, I’ve seen a turn to smaller Cons,” says Jillian. “People are talking about going back to the roots of how Comic Con started.”

I don’t live in San Diego so I’m not qualified to speak on whether SDCC offers community engagement for locals. Probably it does. Many Cons, however, treat the fan community as consumers while viewing the local business community as partners. Three guesses as to whose input drives Con decisions as a result. Smaller Cons are changing that.

“I think Phoenix is much more engaged with actual community than the business community,” says Jillian, mentioning that PCC works hand in hand with local charity cosplay organizations and other groups. “We’re fan-based and community-driven.”

While I think many artists dream of being discovered by a Marvel executive at San Diego, I've known more people who've gotten career breaks at Phoenix. It's easier to network, easier to stand out and promote, and the booths are more affordable (and get snapped up quickly for this reason.)

Given the community involvement, it’s not surprising that Phoenix tries to offer a promotional platform to local creators. “On our social media, we’re not talking about Star Trek or Iron Man – we’re promoting local artists,” says Jillian. “We’ll reach out to them and ask how we can highlight them.”

Anyone who reads this blog knows I’m perpetually irritated by CCI’s lack of interest in the fan experience. Yes, they say they care, and yet they make no move toward improving the crucible of hell that is Registration Day or badge pick-up. Instead of engaging in customer dialogues, they deliver one-way monologues in which feedback is rarely solicited and complaints seem to fall on deaf ears.

Phoenix Comicon, on the other hand, is all about pleasing attendees. “After every year, our first question is: ‘What do we need to fix? What do we need to do better for our attendees and our guests?’” Bry says. “We’re open to change. We use a vigorous survey at the end to solicit feedback and we go through it with a fine-toothed comb.”

He notes that providing this kind of level of satisfaction can mean attendees aren’t necessarily missing out by skipping San Diego: “If you have a better user experience, you don’t need to go to the Mecca of Hall H.”

One of the biggest complaints I’ve heard in recent years is the inability to make San Diego Comic Con a family activity. If you can’t even guarantee yourself a badge, let alone badges for the whole family, it’s tough to make it an annual tradition to share with your children. And this is a dream of many geeks, just as sports fans, activists and artists enjoy inducting their kids into their cultures.

For these people, smaller Cons may be the answer. Jillian notes that she sees a more diverse range of ages at Phoenix Comicon. “We do try to cater to families. We try to have more family-friendly panels and areas. We have adult stuff too but it’s all clearly marked and the events are at night,” she says, noting that kids under 12 are free. “We work hard to keep prices at a reasonable rate because of that.”

Perhaps the biggest issue facing smaller Cons is growth. Provide a fun Con, get popular, and suddenly you’re a small Con no longer. Jillian says that Phoenix wants to retain that small Con feel while offering the star power and activities fans want – and they’re doing this through “controlled growth.”

“Some answers will come as we organically grow, but we’ll find them because we’re having the conversation now,” she says. “We know that we don’t want to be a cookie cutter copy of San Diego. We want our own model of what we’ll be."

Phoenix Comicon is May 23-26 at the Phoenix Convention Center.
Posted by Valerie