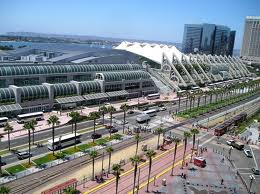 Today the San Diego City Council voted in favor of a $520 million expansion project for the San Diego Convention Center.The reasoning being, the center is currently being spurned in favor of bigger venues in Chicago and Las Vegas by many potentially lucrative trade shows.

You can read the details here but the salient two for we Con-goers are these: the expansion is being financed in part by a tax on local hotels and the expansion will begin in 2014 and finish in early 2017. The missing and highly important detail: how many additional Comic Con badges will be generated by the additional floor space.

Possibly no one's publicized that calculation yet, but that is the crux of the matter. If only a few thousand additional people can attend San Diego Comic Con in 2017, will CCI be adequately enticed to stay? It's hard to imagine the convention center wouldn't factor that into their expansion plans. So let's cautiously assume there will be a decent bump in attendee room, and that will tilt CCI toward staying in San Diego after their contract expires in 2015.

Maybe.Who knows for sure. Logic and foresight have never been CCI's strong suits. And according to the article, "Two more major approvals -- one from a judge, the other from the California Coastal Commission -- are required before ground is broken on the project... a judge will have to sign off on the procedure because, according to City Attorney Jan Goldsmith, it touches on a gray area of the law."


Due to court budget cuts, it could be well into 2013 before we have a ruling. After that, the California Coastal Commission needs to sign off. But anyone who's followed this trajectory over the last few years knows that San Diego does not want to let go of us - and so it would be highly surprising if this expansion doesn't go through. As of today, it looks like we're staying in San Diego.