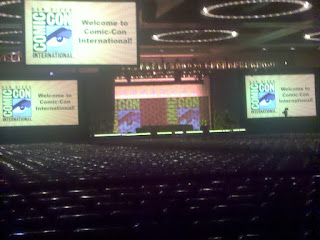 There has been a lot of news so far this Con so I'm just going to summarize:


The River pilot was pretty close to awesome. I don't know if they'll be able to sustain the plot for an entire series, and the Paranormal Activity stamp was strong on it, which could get tired quickly. But it was definitely one of the best pilots I've ever seen here.

Alcatraz I already reported on but to recap - I liked it. So did most people around me. No doubt a lot of that was due to lovable Jorge Garcia being part of the cast, but it is an intriguing storyline: vanished prisoners and guards from 60's Alcatraz materialize in today's world.

Jurassic Park 4 is on, according to Steve Spielberg. Though not any time soon.

Dexter news: The show skips a full year ahead, meaning Dexter's son is older, which changes their relationship; there weren't many details on the new season other than promising something different and exciting. Which anyone could and will say about their TV show, but with Dexter I believe it. They also have a new social media game, "Slice of Life," where you can fight old enemies like the Ice Truck Killer.

I regrettably missed the Locke and Key pilot but heard good things from my friends who love the comic book. Unfortunately it does not look like there will be any kind of miracle for this, not even a DVD release (in its current state.) So if you saw it today, count yourself very lucky.

Last year The Walking Dead had a very popular booth and a trailer that made the crowd go berzerk. This year their booth was meh but the Season 2 preview clip is just as thrilling.

Dark Shadows' original cast (Angelique and Josette/Maggie) was at the panel and said that while they couldn't share any details about the Tim Burton movie, they did say the sets are gorgeous and they have cameos in it. They did say it's "different" from the show. Which confirms any suspicions that the Burton/Depp/Bonham Carter trifecta will completely stamp out the creepy original flavor.

Arkham City has been showcased quite a bit and impressed even a lot of non-gamers.

More pre-registration news: People began lining up for Friday in the wee hours of the night. I talked to a crying woman who had come all the way from Hotel Circle by cab around 4 am to find it was too late. I can only repeat what I said below: there will be passes, even with Preview Night, sold online so don't let it ruin this year's Con if you don't pre-reg on site. Also, please correct the people in the Exhibit Hall saying all Preview Night badges are sold out period, because it isn't true and that rumor is getting a lot of mileage.

Game of Thrones panel is on YouTube, first part here. I didn't see this panel but heard it was excellent, really worth the wait. Besides George RR dropping his wisdom on the masses, the cast seemed pretty entertaining as well.

What was reportedly not excellent: the True Blood panel. In addition to the panel being vague and kind of dull, Alan Ball actually listed Jason's gang-rape as his favorite scene this season. Okay then. Not to be negative, but if you have one of the most popular panels at the Con with fans who gave up an entire day to see you - do something interesting. The footage was intriguing, at least.

Despite massive dinosaur promo everywhere, I haven't heard a whole lot of anticipation of Terra Nova. But if you're close to Petco Park, there's a special Terra Nova van where you can watch exclusive clips; this van is "on tour" which means it may come to your city soon.

Speaking of Petco Park, the shark attack photo op? Not worth walking over there just for that.

On the horror side of things, the Paranormal Activity 3 panel got so-so reviews but Don't Be Afraid of the Dark was a hit.


Two more days. The upcoming panels I'm hearing discussed a lot are: Community, Dr. Who, Fringe and Knights of Badassdom.

If you discovered something magnificent, share it in the comments.
Posted by Valerie