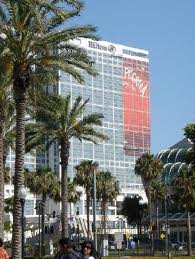 Not really, but that's what you would think from the rush of panicked articles spreading through the interwebs today.

The New York Times notes that Disney, Warner Bros., Dreamworks, the Weinsteins and possibly Marvel (please) are sitting out this summer's dance. ( MTV thinks Marvel will definitely be there.)  Newsarama says that's because any bad buzz generated at Comic Con is as lethal as good buzz is lucrative, and besides, all that glittery swag is expensive to produce. That's true; the recession has hit the marketing budgets of movie studios, too.

But mostly it's all getting blamed on poor Scott Pilgrim. Remember last summer's ridiculous banner unscrolling down the side of Hilton? That right there was the sign that expectations were way too high. Hollywood saw promoting to Comic Con nerds as shooting fish in a barrel, because of our rabid fan-mania (and, I suspect, our alleged lack of a social life.) They miscalculated. Twilight would have been Twilight without coming to San Diego, Scott Pilgrim's fan base was never going to look like The Dark Knight's and besides -  these days TV is the new Film. The most committed fan devotion these days goes to shows like True Blood, Lost, Game of Thrones, Fringe, The Walking Dead, and so on. Fans give their hearts to stories that continue, not one-shots; nerds love ongoing universes they can get lost in, whether those worlds look like Lord of the Rings or Star Trek. Movies rarely offer that and when they do, it's often a retconned version.

So what movies will be showcased this year? Rise of the Planet of the Apes, Cowboys and Aliens (again), Spider Man and - sorry - Breaking Dawn. Hall H will have the same lines as always, even if we don't get panels for The Dark Knight Rises and Superman. While some attendees will no doubt be disappointed, I don't think the studios' partial withdrawal is going to affect much. If anything, it will please the many attendees who feel the Con has become too Hollywood in recent years. It could even be a step back toward the years when the Con was less about celebrities and more about comics.