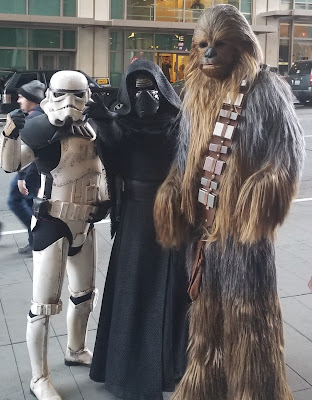 Emerald City Comicon has ended. Did you have a good time?

I'd rate this year as being pretty typical, with no major surprises. My observations:

The swag was decent; ECCC isn't the place for astounding deals but most Cons aren't these days. Vendors offered up the usual "buy 3, get 1 free" type deals when it came to trades, plushies, shirts, games and other stuff. I thought the show floor was a good mix of the expected and the rare.


The events were good. I think SDCC and NYCC can have so many things going on that it's hard to choose, you find out about them after they're sold out, and you inevitably feel like you missed something. ECCC has a smaller number of parties but I think it works.The bar life is also better in my opinion. If you've been to the Gaslamp during SDCC, you know how many randos fill up the bars and restaurants just to join the party. I found Seattle bars had a higher concentration of attendees and nerds and people were more chill and interesting to talk to overall. 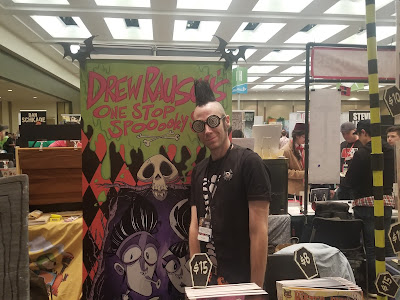 However, the cliquish-ness of this Con continues. I've noticed this other years; people tend to be cagey about who gets invited where and who's friends with who, where attendees at DragonCon, San Diego, New York and others tend to be more friendly and inclusive. YMMV. I reconnected with a girl I met last summer at SDCC and she and her friends outright stated they want ECCC to be "their people" as opposed to the more diverse mix they saw in San Diego, so I guess some people like that.

Speaking of DragonCon - just as Emerald City has been branded as the superior alternative to the SDCC/NYCC juggernaut, DragonCon seems to have risen up to claim that mantle for people who aren't into comics. ECCC still dominates for comic book fans; but I talked to multiple groups of attendees who are more into cosplay and parties and special events - and they all mentioned DragonCon as their priority destination. 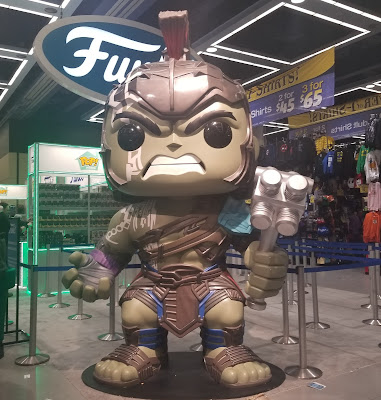 I didn't have the time to make as many as panels as I normally take in. And to be truthful, I wasn't all that captivated by the offerings. ECCC definitely has a certain slant and it's one that I have grown away from. That said, I do appreciate that this Con allows for certain offbeat topics that you wouldn't likely find elsewhere, since other Cons tend to prioritize the most mainstream areas. I can't imagine finding out at SDCC, for instance, that Wonder Woman's creator William Marsten wrote an out-of-print book called "The Emotions of Normal People" (favorite title ever) and actually getting to read excerpts from it. If you don't care about weird little jibbets like that, you may not appreciate ECCC - but I like that this Con still dishes up some erudite and unusual vendors and panels. 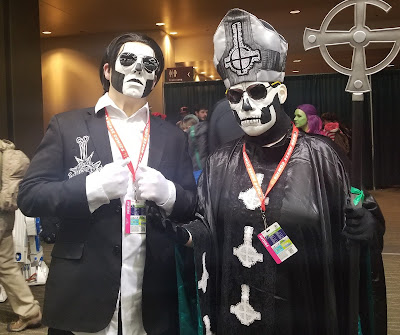 At the same time, ECCC still brings out the classics - if you're a Funko freak, a fan of American Gods or Back to the Future, if you just wanted to sit down and play MTG with other zealots - you could wallow in your interests. And I saw more classic collector and nerd stuff for sale here than I see at bigger Cons. I'm sure that's a matter of floor space being more affordable. It's really nice for nerds and pop culture collectors who are hunting for the type of toys and collectibles that used to signal COMICON more than the freshly printed trades that dominate today.

I skipped the Main Stage as always but the people I talked to seemed mostly pleased. I met two guys who came from New York for the first time. They were relieved by the accessibility of the main room, stunned at the (comparatively) short lines and highly enthusiastic as a result. I also met a D23 cosplayer who thought ECCC was an easier place to keep her kids engaged and entertained. She intends to come back next year. I try to always get feedback from people who target different interests from me - parents, celebrity fans, cosplayers, people under 30 - and pretty much everyone I spoke to seem satisfied. 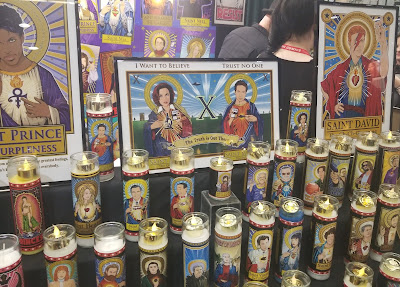 What Emerald City Comicon does so beautifully, of course, is the Artist's Alley. There's just no comparing it if you're used to big Cons that treat AA like an afterthought. It's a perfect mix of superstars like Jaime Hernandez (interview coming in a few days) and newer talent to discover. I remember when I first went to SDCC, I saw mostly pin-up girl art in Artist's Alley with some dragons/sci fi work thrown in. At ECCC, I saw a range of fantasy art, takeoffs of classic literature, original universes, Halloween-themed art, animal art and so on. Part of the thrill of going to a Con is finding that work that speaks specifically to you, and Emerald City Artist's Alley definitely has the variety to deliver.

Just as nice: seeing how many attendees were swarming the AA rooms. This Con attracts people who are passionate about art and comics and design, because they know they can find it here. I suppose I will sound like a snob if I call other Cons philistine in comparison, but there's a palpable difference in ECCC attendee interests. It's a comforting feeling for those of us who've watched other Cons turn into a Hollywood flea market. 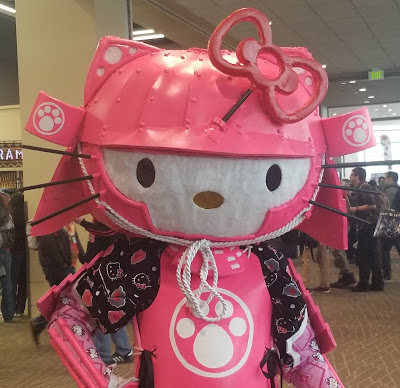 One thing I need to mention: Musicalley didn't seem like a big success to me. Possibly I missed its best moments. Overall, it seemed like an admirable attempt to make the Con more well-rounded while giving local talent a spot in the nerd sun - but it just didn't work, what I saw of it. Other attendees didn't seem entranced with it either. Again, maybe there was some kind of stage glory happening and I was elsewhere. It's entirely possible.

Finally, I have to praise the ECCC staff. Maybe I just met the best of the best, but every volunteer/staff member I spoke with was a pleasure to talk to. None of them had that frenzied, ready-to-snap stress level of bigger Con volunteers, which tells me the organization and training is exemplary.

All in all, I'll continue to recommend Emerald City. I didn't feel quite the same magic this year as other years but that's more my jadedness than the Con itself. I think ECCC offers an ideal blend of Hollywood, gaming, comics, cosplay and events. You're not spending hours in line, you're able to have fun in Seattle and stay close to the Con, and it's just a much easier and often more fulfilling experience than the chaos and demands of a bigger show. For those of us who are sick of the latter, Emerald City feels like a final refuge of old-school nerd enjoyment.