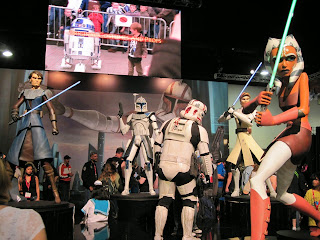 Heidi MacDonald is in Publishers Weekly, talking about how San Diego Comic-Con is "evolving." Unlike other articles that ponder is Comic-Con still about comic books? or the ever-popular headline Hollywood glitters at Comic-Con, her article actually shares some changes you can expect to see in the comics section this year.


For those of you who just set foot on Planet Con for the first time, the show used to look quite different. It really was a comics convention, with aisles of back issues and artists signing their work and comic book nerds frantically pawing through boxes to find their Silver Age dream. Today that aspect is still there - but it's much smaller, as if some nefarious studio head pointed a shrink ray at it and said, "We'll be taking over from here." That's why when you step onto the Exhibit Hall floor, you'll find the biggest crowds swarming through the middle section carnival of movie-themed exclusives and trailers and merchandise, and then over toward the right, more spacious aisles of comic publishers. Where depressingly, you can often see some top artists and writers sitting behind their tables looking bemused as attendees pass them by.

Full disclosure: I didn't witness the glory days that were seriously comic-centric. By my arrival in 2002, Hollywood already had its celluloid claws firmly in the convention center. It wasn't as dominant as today, though. I remember my then-girlfriend being stunned in 2003 that Angelina Jolie was there to promote Tomb Raider. (Now it's more surprising when a major star doesn't show up.) And the attendees weighted more heavily on the comic book nerd end of the scale - they looked different, they bought different things, they went to different panels. I could have an excellent discussion in any bar about Love and Rockets or Action Girl Comics.

That is no longer the case. I don't begrudge you new fans. (Well, sometimes I do, like the Google employees who scoffed at Grant Morrison's panel last year because they were impatient for the Pixar panel to start. SDCC etiquette: if you sit through a panel you don't like to get a good seat in the panel you do, at least be respectful.) However, it is disquieting when smaller pubs pack up and leave SDCC because they just can't afford to come anymore. True, we comic nerds are soaking up their great work at Cons like Emerald City but I fear a day when SDCC is all big publishing houses displaying the same books I can see at Barnes and Noble.

Enough of my melancholic ramblings. Here's what the article said:

Just a few tidbits, but enough to convey that yes, the comics aisles have become the shrinking polar ice cap of the Con. Which isn't terribly surprising, given how many people - artists and writers who earn their daily living via comics - tell me that other Cons are far more profitable for them. (And often more emotionally gratifying, as they connect with a higher number of passionate comic readers there.)


One thing I like about CCI: they are committed to comic book culture. I think some people blame them for SDCC's Hollywood invasion when in fact they're just trying to accommodate fan interests and balance their economic survival with their cultural mission. Their focus on comic art galleries, a possible museum and other comic channels shows that San Diego Comic-Con still values comics. But the influence of fan spending and attention still has a direct impact on who shows up each year.
Posted by Valerie