Where we are now with SDCC hotels 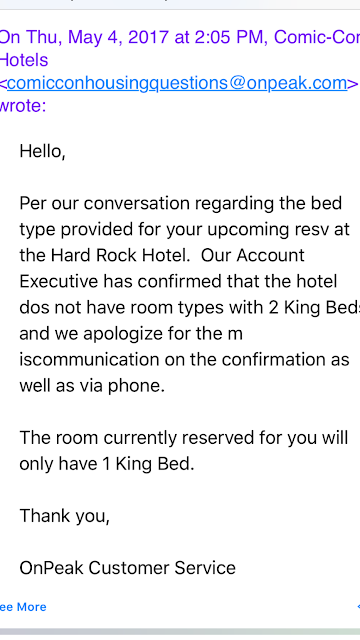 Happy Free Comic Day! Hopefully you picked up something good to distract yourself from our next date with anxiety: Monday and its second round of hotel emails.

I think we can all agree that the last week has been frustrating. And not just for those of us who failed to get a room; even the people who did get assignments ran into some trouble. Let's recap.


People Who Got a Room

There was plenty of rejoicing last Monday, but over the next few days a few issues reared their head. Such as...

Quite a few people requested 2 beds/a quad and wound up with a room with 1 bed.

While you can kind of squeeze in an air hammock for another person in a one-bed room, it's tough to squeeze in an extra 2 or 3 people. Groups that were hoping to put 6 people in a quad were really out of luck. This was the scenario I heard over and over, and in one case the above email happened. I'll summarize:

My friends got what seemed to be the perfect room assignment: one with 2 king beds at their 1st choice, the Hard Rock. Being experienced attendees, however, they knew that the Hard Rock doesn't have rooms with 2 king beds. (Real talk: I never would have caught this.) So they contacted OnPeak who swore the room really did have 2 king beds - and finally, after insistent prodding, OnPeak discovered yes, the room had just 1 bed, which my friends can't use. Not only were they assigned a room different from what they requested, they were given misleading information and encouraged to put a deposit down on a room that would have been a disaster when they showed up.

People annoyed each other with bad room exchange behavior.

Not a new story. But guess what, I'm going to give advice anyhow! This happened to multiple people: someone would beg for a room, be offered one, and then get cagey. They wanted more proof than just the reservation email, they wanted a lot of personal information, they said they would recoup a deposit already paid and then vanished. Why do people do this? If someone has a legit downtown room to give away, be grateful and take care of it quickly. On the other end of the scale, people would offer rooms and then vanish into the night. Happened to me twice. I know it's awkward to say "I gave it to someone else" but by disappearing, you're delaying someone from moving on and finding another room. Just tell them.

Yes, it said Friday, May 5 at 12:00 a.m. That was terrible communication, because many people assumed it meant Friday night midnight. No, it meant one minute after 11:59 pm Thursday night. So the midnight hour struck and like Cinderella's coach, hotel assignments vanished - in theory. Last year when I refused (via silence) the Town and Country room I was assigned, I received 2 emails after the deadline urging me to pay the deposit.

Ingratitude and unrealistic expectations were present.

The majority of attendees getting rooms were thrilled. However, a few ingrates made themselves known, like the girl who told my friend it was "too bad" that she "only" got the Hilton Gaslamp or the idiot who told me that he only stays at the Marriott Marquis - and the Hyatt (on the other side of the Marriott) is just too far, so he was thinking of letting his Hyatt quad go. Call it attendee Darwinism if he does; I have no sympathy for people who feel sad that they only got a downtown room and not a free pony to match.

People Who Didn't Get a Room

Some of us were able to finagle reservation transfers; some of us (like me) benefited from the "I really need 2 beds and can't use this room with 1" fiasco. The question is: will we still get the room assignments we would have gotten? Or did our new reservations cancel out any future assignments as duplicates? I got in very quickly during the sale so I'm expecting an email Monday. I'll be your test case as to whether transfers cancel out other assignments or not.

A lot of misplaced hope (in my opinion) is still suffusing this group. I believe there are downtown rooms that will be handed out Monday - lots of downtown hotels did not feature heavily in last week's assignments. But by and large, I don't think we're going to see a lot of first choices like Marriott Marquis and Hilton Bayfront filling our mailboxes. If you get a downtown room that wasn't on your list, remember that the shuttles can eliminate any walking to and from the Con - and you'll be right in the heart of all the great restaurants and bars. You'll be fine.

Finally, in terms of numbers, I keep seeing projections that 20% of requests were filled last week. Maybe they were, but the people I know must be statistical anomalies because it's more like 11:1 in my world.

I hope Monday does deliver; I hope last week was the trickle before the flood. I also hope everyone gets a definitive email: this is the room you got, you didn't get a room but are on the waiting list, you didn't get a room, the end. People want to get this settled and move on. Here's hoping we all get the answers we need.
Posted by Valerie