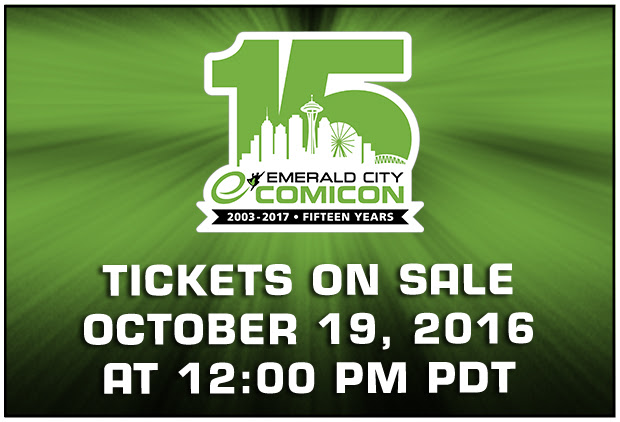 So we found out a few things today about Emerald City Comicon :


Oh and their site is having loading problems. Mercury retrograde or massive ticket sale interest?

I'll observe a respectable mourning period for their Tumblr later (but hey, they have Google Plus! Because that's relevant) and focus on the badge types available to you and I.

And that's it! No line-jumping, aristocratic, extra-special VIP badge for you. All 4-day people have to mingle together, supernerds and the hoi polloi alike. Limits are 4 badge per type for a total of 16.

So what does that mean in terms of getting a badge? Well, you can't spend your way in, obviously, but I still don't think it's going to be impossible to get all 4 days. Maybe the 4 day badges will sell out immediately but you should be able to get all single days if you move reasonably fast. I'll speculate more on strategies later; for now, create a fictitious dentist appointment and block that time on your calendar so you don't get called into a meeting as happened to me last year during the ECCC sale. (I just didn't show up till I had my tickets; I know my priorities.)

They also posted some comic guests and included this macabre invitation: "Join us for Stan Lee's final ECCC appearance!" I know he's probably just hanging up his dance hall shoes, but it sounded a bit ominous. You can also apply to host a panel.

But seriously, why did ECCC kill their Tumblr?
Posted by Valerie