6 weeks from tonight we'll be watching The Killing Joke. But in the meantime, we have other tantalizations to occupy our minds.


Like this latest Mattel exclusive of Wonder Woman in her invisible airplane. Serious collectors say it's just a rehashed 2010 exclusive - but I still think it's cool. Mattel also is bringing Halo and Minecraft items.


In news that sparked a collective fangasm over Chris Pratt and Benedict Cumberbatch today, Doctor Strange is already in San Diego - and yes, the movie will be at SDCC. James Gunn hinted that Guardians of the Galaxy vol 2. will be there too.

3 people have asked me to get them this Panda Man exclusive from Suicide Squad.  Speaking of which, you can win a trip to San Diego Comic-Con by dressing up as a main character. See above. Hopefully there's leeway to be Killer Croc with an actual crocodile head, because it's just visually cooler. 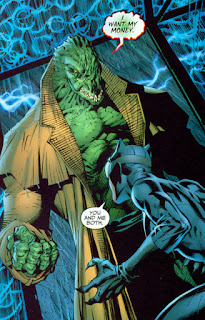 Entertainment Earth understands that the ventriloquist episode of The Twilight Zone has haunted you for years, and now you get to have a tiny version to creep you out right in your bedroom.

Adventure Time fans - do you want to play in the Card Wars Doubles Tournament at SDCC? You can compete for the championship with the new cards before they're released.

Luke Skywalker/the Joker won't be at SDCC this year - most likely. It's all about Mark Hamill's schedule so who knows, maybe something will change and he'll make one of those miracle appearances on stage to thunderous applause.

There's going to be a Wynonna Earp meetup on Saturday at 5:30 pm - but the time could change depending on programming (wise move) so if you want to make this, follow @earpermeetup.

Of all the Kidrobot figures, Street Fighter Shin Akuma seems to be very popular.

And finally, here's a controversy that many attendees will have an opinion on - booths in Artist's Alley that sell prints of other artists' work. This has pissed off Buzz/Aldrin Aw to the point of throwing one vendor out of Wizard World Minneapolis and starting an #OccupyArtistAlley movement. Can't say I care for the hashtag but I do understand the sentiment. Gail Simone weighed in too to lend her support. I realize this isn't the kind of flashy movie/exclusive news that's lighting up the SDCC grapevine right now but it matters a great deal to the vendors, professionals and attendees who connect through Cons as a channel for buying and showcasing original work. Anyhow, check out his Facebook page for his actual letter.