Will you be crowned cosplay champion at ECCC? 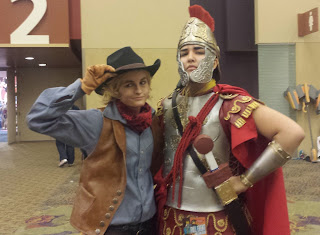 Emerald City has always been known for its next-level cosplay. Ingenious, creative and convincing, the cosplay you see at ECCC represents some of the highest skill in the field. These cosplayers go beyond Spiderman and Harley Quinn clones to depict characters from cult movies and indie comics, and the sheer effort involved is mindboggling.

So it's quite exciting that Saturday night at Emerald City - 9 April - will be the Western Championships of Cosplay. The "first stop in the ReedPOP's 2016 Global Cosplay Competition Circuit," this event will be watched by thousands in person and livestreamed by no doubt thousands more. $5,000 in cash prizes will be handed out and the winner will make it into the final round of the 2017 C2E2 Crown Championships of Cosplay in Chicago, the final stop. (Yes, this competition apparently spans two calendar years. No donuts for you if you want to make sure you fit into the same costume.)

You must represent a character or element from the pop culture realm and demonstrate mastery in one of four skill categories:

You'll be judged on the quality and craftsmanship; obviously no store-bought costumes are tolerable. After being judged offstage, you'll strut your stuff on the main stage and exhibit two or three poses while the MC reads the description you hand him. You can't pick your own music and you can't speak.


The deadline is 4 March. Good luck.
Posted by Valerie