The good convention center expansion is still in play 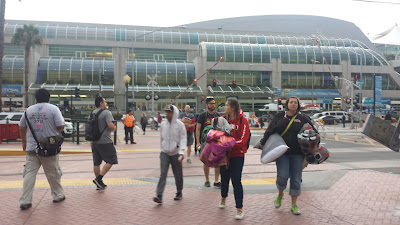 Kind of, it is. Rabbi Laurie Coskey, the chairwoman of the San Diego Convention Center Board of Directors, says the Board "will continue to support a contiguous expansion that will provide the greatest financial and economic value for the city of San Diego."

That last part isn't just her opinion; an elaborate study reached that conclusion.

The Chargers feel differently, of course. Fresh from their rejection by the NFL to build a stadium in LA, they in turn have rejected the idea of a Mission Valley facility in San Diego and are back to requesting a multi-facility convention center expansion downtown. Not that they emphasize that part of it. Instead we're hearing the usual talk about how the facility would be "a permanent home for Comic-Con and a Comic-Con museum."


Well! What nerd could argue with that? All of us, actually, once you get to the part about the convention center "expansion" not actually being attached to our convention center. First-timers: divvying up your SDCC days between different sites may not sound like a huge deal. We already do that somewhat, with panels at the library, the Horton Theatre, the Hilton Bayfront, etc. However, the difference between an annex down the street and an actual increase in floor space is an important factor when it comes to potentially increasing the number of attendees permitted at SDCC.


Expect to see a ballot measure for the November election. In a world where we decide presidential primaries with a coin toss, this issue will apparently stagger on and on for eternity like a bureaucratic zombie. Stay tuned.
Posted by Valerie