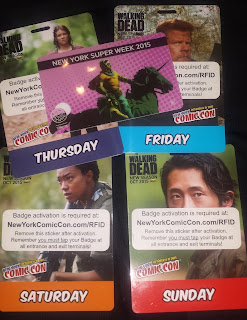 New York Comic Con: it's only a few weeks away. Anyone who watched the ticket sale go down knows that 4-day tickets sold out pretty fast, but that's not a permanent situation like it is with San Diego Comic-Con. StubHub has plenty of tickets available. So if you're burning with the desire to walk into the Javits Center in October, know it's not a lost cause.

(One warning: NYCC badges use RFID technology, so any counterfeit badges will be sniffed out immediately. Caveat emptor.)

A few reasons people are very hyped for NYCC this year:

And those are only a few of the events going on. That said, I would check out the programming before plunging in if you've never been to NYCC before. I've noticed a general belief that NYCC is SDCC's East Coast twin and is therefore its equal in any way that matters. That's actually not true. NYCC may have impressive attendance and I won't deny it has a lot to offer. But it's not going to roll out the same experience you'd get in San Diego.

One difference: the pop culture aspect of NYCC is a bit more broadly defined, which some attendees like. It's hard to imagine the Pretty Little Liars panel showing up at SDCC, for instance. Super Week also offers an assorted array of events around the city. But mostly NYCC offers a different feeling than that magical nerd bubble that prevails at SDCC. It's just not as engulfing, possibly because when everyone walks out they're pulled in so many different directions.

None of which is to dissuade you from going. New York Comic Con is a great option if you're still morose over missing SDCC or just hungering for another big Con before the year ends. And it's in New York, which means that even you hate it (kind of impossible if you're a Comic Con person) you can still find something fascinating to do. Autumn in New York is a beautiful visit on its own. So if you think the programming is a fit, investigate your options and give it a shot. There's a reason this Con has become so popular so fast, and I think you might love it.