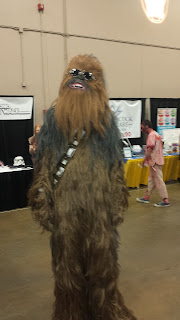 Today was my first day (ever) at Alamo City Comic Con. This Con was recently projected to have 90K-100K attendance; whether that happened or not I don't know, but I can attest that it does feel big and crowded.

Here's how I'd say it shakes out compared to other Cons, in case you're considering coming next year. I don't make comparisons to be cruel or because it's a competition, but to establish a frame of reference. 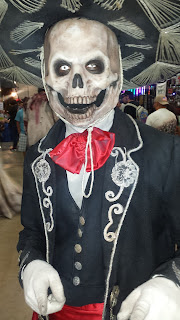 Size and crowd. The convention center is spacious. The setup is uneven; there are some surprisingly open areas and other areas that are crammed and congested. The crowd here seems pretty mixed - lots of families, teenagers, and adults of all ages. It seems very community-based, like a lot of people know each other. My read on this crowd is that most aren't hardcore nerdy - more of what I'd call (please forgive any elitist tone here) "mainstream geek:" people who like superheroes and the Walking Dead and catch all the Marvel movies, but would never descend into D&D, MTG, furious Bronze Age comic book arguments, LARPing, etc.

One thing I will say: everyone here is very polite and friendly. So far San Antonio seems like a very down-to-earth, welcoming city. Yes, I know Con people tend to be pretty chill in general but there's a warmth here that made me feel immediately comfortable in a way I've not experienced at NYCC, ECCC or Phoenix.


Comics. The back issue selection and prices have been decent so far. Artists' Blvd had mostly artists I wasn't familiar with, with the exception of Jim Hanna who used to work at my old comic store. (See his thoughts on ACCC below.) Even though this Con was branded to me as a "comics Con," I can't say I've seen much of a distinction that way. Possibly ECCC has spoiled me that way and raised the bar impossibly high, but overall I'd say this looks like a lot of other Cons. That said, it's only in its 3rd year so I'm sure the comic book aspect will intensify in the following years. 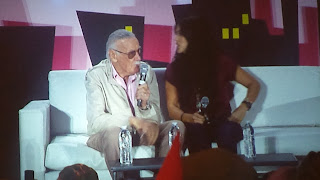 Gaming. Cannot speak to this. Sorry. I did see some gaming events but I'm utterly unqualified to judge them.

Collectibles. I thought this was also decent. Probably I'm thrilled because I scored the tiny Lego Bigfoot that I've been aching for, but in general I saw a lot of cool things of various stripes. Do I need a flask with Vlad the Impaler on it or a Blaze Starr magnet? Yes, it turns out. But that's me; you might like the numerous action figures, creepy dolls, pastel wigs, odd t-shirts, 1970s toys and other wares piled up in sundry booths. I didn't inspect everything with a close enough eye to say how many rarities were truly afoot, and everything that's "new" at one Con will soon be blanketed across all of them - if their vendors can get in the door - but I thought overall there was good shopping to be had.

Cosplay. Not a cosplayer myself, but I can appreciate an artful craft when I see it and some of the cosplayers here are artists in every sense of the word. Sure, there's plenty of beginner-level cosplay going on, but the best cosplay I've seen here is on a level with SDCC or NYCC. The Slideshow Collectibles contest tonight had a lot of strong contestants (a few of whom I was surprised didn't win anything.) 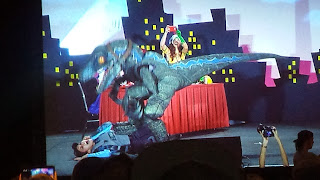 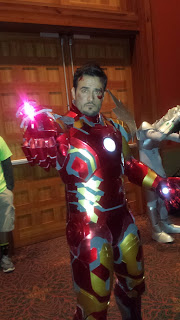 Panels and activities. I didn't see much that appealed to me here; the selection was pretty small compared to even Phoenix Comic Con, which has smaller attendance but a vast range of programming. But that may reflect the crowd's interest level. Mostly people here seemed interested in meeting different celebrities and doing the floor. What was diverse: the floor activities. The first thing I saw walking in was a selection of animal pelts from possums, deer, coyote, bobcat and other animals. That was a Con first. Then I saw a row of bounce houses. A wrestling ring. A ton of Star Wars photo ops thanks to 501st Legion. At times it felt less like a Comic Con than a giant indoor fair but once I got into the regular booths it began to feel more cohesive. It's clear that the crowd (especially families) like the variety available. 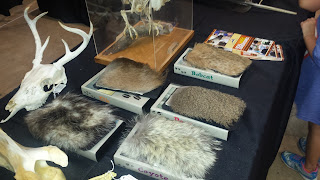 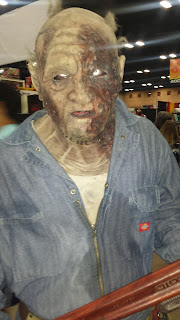 Artist. I asked Jim Hanna (below) how this Con stacked up to others. His answer: "It's better than San Diego because you don't have wall to wall people - you can talk to them and get to know them. It's more intimate. But it's growing every year and today felt kind of like San Diego. But you can still talk to people about art and communicate." He also said that Alamo City was more comics-oriented than other Cons.

And because I also asked what he's working on: "A comic book called Pugly, starring my dog. A billionaire old lady dies and leaves all her money to her dog. So of course everyone wants him to get the money and then he gets dognapped and winds up on the street and he's even in a dog gang at one point. The kickstarter is 1 October." I think we can all agree that the world needs more dog comics, so be ready for October. 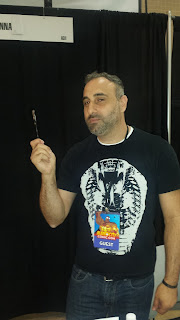 So those are my initial thoughts on Alamo City Comic Con. Is it worth going if you're local or semi-local? Absolutely. I wouldn't miss it. It's definitely a great community event in every sense of the word. But in terms of traveling a long distance, you could probably get the same experience at a closer Con so you might as well save your travel $$ for one of the bigger shows. Just my opinion.
Posted by Valerie