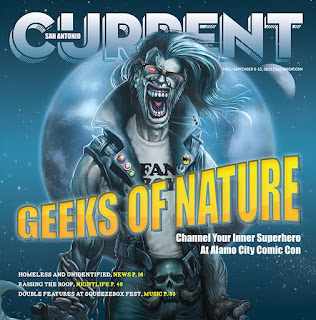 
If you had to name the biggest Comic Cons in the country, you'd probably start with SDCC, New York, Salt Lake and Denver. One you probably wouldn't name: Alamo City Comic Con in San Antonio. But as it kicks off its 3rd year of existence today, event founder and director Apple de la Fuente is estimating attendance to land between anywhere from 90,000 to 100,000 people.

That's a big Comic Con, which is going to put it on the radar of nerds looking for a new event and maybe an alternative to SDCC.

I've never been (though I'll be there this weekend) so I can't tell you firsthand why/if this Con is worth your time. A few things I do know:

I'm highlighting this Con because - as always - I think it behooves all of us to look beyond San Diego's hallowed walls and find alternatives that are just as fun while being more accessible. I know Alamo City is popular with locals, but I don't know if it's necessarily worth traveling to, so I'll give my opinion on that this weekend, and decide who this Con will probably appeal to. So stay tuned - and if you're going, let me know what you think of it.