Happy Independence Day Eve. If you're of the rainbow persuasion and you're headed to San Diego Comic-Con in a few days, you might be wondering how queer it all gets. There's a pernicious media stereotype that the Con is 130,000 straight white fanboys grunting over booth babes and manly superheroes, which is why I suspect I get so many questions from older, gayer, browner, female and other people asking delicately, "Are there a lot of  <people like me> there?"

The answer is yes, everyone is there, because nerd hearts live in every kind of person. But if you're LGBTQA, you might be wondering just what kind of panels and parties are there for you. Here are a few options.

Obviously queer people are in comic books from most publishers. Booths like Fantagraphics, Drawn & Quarterly, Image, Oni and Boom! are all more or less forward-thinking on this issue, and even DC and Marvel are getting into the game. (DC faster than Marvel, obviously.) From major hits like Fun Home to lesser-known gems like How Loathsome, LGBTQA people are burning up the page. But in addition to your normal comics perusing, you will definitely want to swing by Prism's booth at some point, especially when your favorite artists and writers are signing.

This year we have 8 LGBTQA panels and a mixer. All but 1 are in 28DE, which is apparently the lavender corner of the Con.


LGBTQ Geek Year in Review. 6:00 in 28DE. Media diversity and "key moments in comics, TV, movies and animation every queer geek should know about."
Friday, July 10


Hopey, Julio, Skim, Oafs, and Beyond. 1:00 in 28DE. "Queer character visibility in alt and indie comics." Includes the Hernandez Brothers, Mariko Tamaki and Ed Luce.
Diversity and Queer Gaming. 2:00 in 28DE. "How does the "Gaymer" identity spill beyond the tabletop and what role do minorities play in an industry that still doesn't reflect its audience?"

The Gay Agenda in Horror: Terrifying Subtext. 7:00 in 28DE. "The history of this popular genre from a queer perspective."
Saturday, July 11


Gays in Comics 28: At the Intersection of Comics and Life. 6:00 in 29AB. "Creators examine how their queer identities intersect with other aspects of their lives, such as race and ethnicity, religion, and family, and how that influences and defines their comics work." This is a one-hour panel followed by a one-hour auction and mixer.  Which sounds like it's a great place to meet your fellow queer nerd brethren, but I've always found that mixer very cliquey. Still worth attending, though.

Not a lot going on in girl world, unfortunately. But these two parties are celebrating Comic-Con in a big way.

You get an EDM and club hits DJ in one room and Urban hits DJ in the other; "sexy go-go Heroes and Villains;" free face and body painting; a cosplay contest. Prism Comics seems to be a sponsor. The ad suggests Joker as a go-go dancer, which could easily become a top Comic-Con memory.

House of Styles
When: Friday night, 10 July
Where: Numbers
Cost: 7

Numbers is also having a party Friday night called House of Styles. If someone is really doing a Michelle Pfeiffer Catwoman drag performance, complete with whip, I want to go. 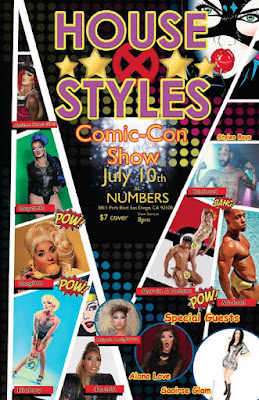 Be aware that various meetups will be going on all over the place reflecting LGBTQA interests; if you belong to any digital communities, poke around and see who's going to SDCC. You could well find out about some interesting off-sites and private parties.
Posted by Valerie