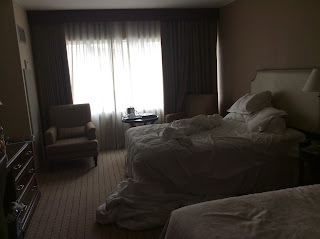 Today I did something I haven't done in several years: I booked a fully refundable downtown safety
room for San Diego Comic-Con 2016. It was a bit of a rush, to be honest - something I thought was lost forever. Years ago I would book the Horton Grand or some other not-first-choice hotel as a backup and then let go of it when I scored on Hotel Day. (And I always scored, until this year.) Then everything started getting non-refundable and I just released the whole concept of backups.

Thanks to "Ace," the best attendee in the world and my very own Winston Wolf - he also got me my room at the Hard Rock and my Conan tickets - that just changed. I have a backup, a good one. Since you're probably curious, it's Hotel Z at 6th and Island - a new hotel, close to the convention center. They're now reserving rooms for next July. With only 96 rooms and reasonable rates, it's selling out fast. (Be aware that I'm working other hotel room angles so I'll probably let go of this room at some point; check back with me in the spring if you fail to get a room on Hotel Day.)

If you're still licking your wounds from last Hotel Day, you might be considering your own safety room action. A few things to consider:

Good luck. And remember, it's never too early to start thinking about your next Comic-Con.
Posted by Valerie