What updates did we get today?

We got in the mood for the Rogue cut of X-Men, thanks to the above clip.

We got another brief article on the hotel room issue. If you're curious: "last year, hotels committed 56,600 discounted hotel room nights but Comic-Con could easily fill twice that."

We also got a Fear The Walking Dead teaser and saw a poster that took me a good 2 minutes to understand. Apparently it's supposed to indicate the zombie drag/shuffle. 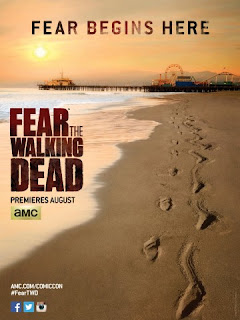 io9 did a "What I'm Looking Forward to at Comic-Con" post but it was surprisingly generic.

We saw (ok, a few days ago) these Jem & the Hologram fashion dolls.

In the category of sentences you never thought you'd read, Grant Morrison announced his upcoming Santa Claus comic from Boom! Since he has 2 panels to himself, maybe he'll expound on that.

More SDCC exclusive Magic: The Gathering cards will be afoot. So will these Four Horseman's Raven figures.

Future Con alert: Sandman, Preacher and a bunch of other Vertigo properties got shuffled between studios; it's unclear yet what this means for timelines. Oh, and Spider-Man will mine the high school angst of John Hughes movies.

Metallica's Kirk Hammett loves SDCC so much that he's returning again to sell little green action figures and do signings. No secret show, though.

Syfy is going to grace you with swag, but you have to work for it. You have to track down the Midas street team who will be roaming the area and see if they'll give you:

The team will be in bright yellow shirts in the "gaslight district." So apparently when you approach them they'll tell you you're crazy and no such promotion has ever existed.