What did we find out today?

Have you missed Josh Holloway? He's headed back to Comic-Con with another pilot: Colony. He and Sarah Wayne Callies play a married couple in an LA that's "controlled by outside forces" and have to fight to reclaim a lost kid. While it feels unnatural for Sawyer from Lost to be married to Lori from The Walking Dead, this Saturday pilot screening should be a popular panel.

Nerd Fu is giving away a Comic Con Survival Pack. You have to love practical contests.

The next Penny Dreadful exclusives are here: The Creature  and his creator, Victor. We also have a Batman Chair Cape, while Gentle Giant is ready to thrill  G.I. Joe fans. But of course, you can see all the collectibles and exclusives here in CCI's handy list.

Want to go to Nerdist's VIP Comic-Con party? Their corporate security partner ESET is giving away tickets each week leading up to the Con.

The sheer volume of Funko figures is overwhelming at this point - but I have to call out these cool Supernatural Mystery Minis. 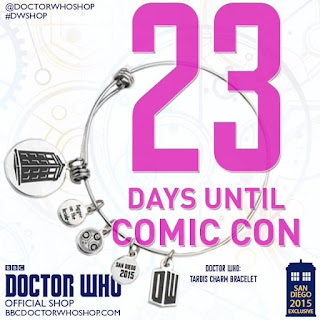 Along with this Doctor Who charm bracelet.

E3 brought us a whole mess of game trailers - some more exciting than others. Expect some of these at SDCC.

If you're thinking about going to Lovelife's epic Star Wars-themed boat party "Episode VII: A New Boat," you might want to read this interview to know what to expect. For instance, if you've been to their past SDCC events, be aware this year's yacht holds 1000 people - double the usual capacity.