Stars Wars is ready to dazzle you at Comic-Con 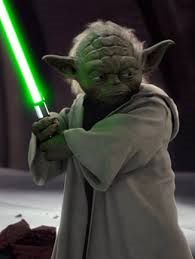 Virtual reality duels with Yoda. Sneak peeks at The Force Awakens and new collectibles. Impersonating Darth Maul. We finally know what Star Wars beauty is coming our way in a few weeks and it all looks incredible.

Clear your Comic-Con Friday and be ready for the Force to awaken.

Obviously the big one is the Hall H panel with JJ Abrams and "special guests" on Friday. You'll get a "special look" - as in, footage that will probably have everyone on the edge of their seats.

We'll also have a two-part Star Wars Publishing panel in room 7AB from 10 am - noon. "New Star Wars retellings for a younger generation of fans."

Following that at noon in the same room, we'll have Hasbro Star Wars - a panel that hints at "a special product reveal."

That's followed with a Star Wars Collectibles Update at 1 pm and then Industrial Light and Magic 40th anniversary panel at 2 pm. We're still in 7 AB for this one.

"For the first time, Star Wars joins forces with characters from across The Walt Disney Company in Disney Infinity 3.0 Edition – the next chapter in the best-selling hybrid toy/video game series." That means you can visit the Disney Infinity Pop-Up Shop, located in the Gaslamp District, and play as Ahsoka Tano, Luke Skywalker, Darth Maul or other Star Wars characters.

You can also enter the “Disney Infinity Only in the Toy Box” mediated reality experience, where you'll virtually enter the Toy Box and interact with Disney Infinity characters "such as engaging in lightsaber duels with Darth Vader or Yoda." You get a customized photo and video with your chosen character.
They'll also have a Toy Box TV Live Edition webcast on Twitch featuring new announcements, surprise guests, contests with prizes, and exclusive giveaways.
And this isn't everything. More Star Wars announcement will roll out over the next days and weeks. How excited are you?
Posted by Valerie