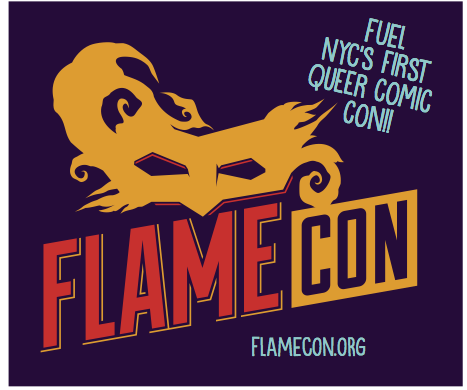 A few months back, a new New York LGBTQ Con called Flame Con was announced. Born of the efforts of Geeks OUT to foster more content and inclusiveness for queer nerddom, the inaugural Flame Con will be held 13 June in Brooklyn. It's a one-day affair, with 1500-2500 attendees expected; Geeks OUT president Joey Stern provided more detail on what people can expect.

Well, thank god. No, seriously, I get what he's saying. Nerds of all stripes and sexual orientations are welcome at this. Why would a straight person want to go to Flame Con, you ask? See the next point - but also to hang out with their friends and go to the very fun after party. Just as straight people are welcome at Gay Pride and other events, anyone can come to this.

That being specifically "smaller scale creators they might otherwise miss at bigger conventions." If you're a worldly nerd who's read your way around the block, you know quite well that small can = talented and big can = mediocre. Some of my favorite work has been by artists and writers who just haven't gotten much acclaim or attention, for whatever reason. So Flame Con is an opportunity to put some interesting creators into the spotlight.

There's going to be queer content and a crossplay-friendly environment.

In recent years we've all seen (and maybe participated in) the dialogue around whether comic conventions have a harassment and/or diversity problem and what organizers should do about it. Here's something I think many straight people don't always grasp. Even when there is not outright harassment (and although harassment does happen at SDCC, the attendee community by and large is awesome in my experience) there's often still an automatic default assumption that nerd = straight, white male. This is conveyed in countless subtle ways that can be mildly annoying or downright  alienating.

There's been a marked effort to include LGBTQ panels at Cons in the last few years, which I applaud, along with other panels on diversity. But lots of people still feel a need for a Con where they are the default and not the special interest group. Stern says that Flame Con will offer that kind of environment - for instance, crossplayers will be in a safe space and the panels will go deeper than the typical obligatory Homo Comics 101 panels that tend to crop up at Cons. They might also partner with GaymerX.


So far the biggest guests I know of are Phil Jimenez and Cecil Baldwin from Welcome to Night Vale. But Stern says they will be adding other big guests over the next 2 months and making more announcements. It wouldn't surprise me if attendance went well over 2500.
Posted by Valerie