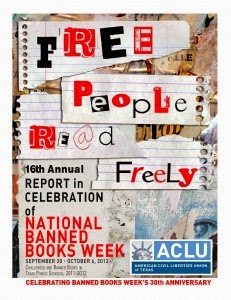 No one wants their comic books taken away, right?  Or to be told how to think?

The tentacles of censorship spread in many directions - violence, sex, politics, religion - but they all grow out of one central tyranny: the need to control. Over the years, comics and graphic novels have been subjected to this as much as any other art form, with both consumers and governments trying to restrict the availability of "subversive" material.

Creators like Neil Gaiman, Alan Moore, Alison Bechdel, Jeff Smith and Marjane Satrapi have all had their work attacked - and those are just the top names in the field. Plenty of emerging writers and artists are silenced before they can even break into the public eye. While we can fight to preserve the availability of popular material, we'll never know what potential masterpieces are strangled by censorship in their infancy.

This year, for Banned Books Week, CCI is teaming up with the Comic Book Legal Defense Fund to present Beware of Comics! - what they're calling "a lively conversation about comics, censorship and what makes the medium so dangerous in the 21st Century." Scott McCloud and Larry Marder will lead.


I feel like most nerds have a maverick heart - generally speaking, we tend to be the nonconformists of society. So consider supporting CCI and the CBLDF if you can, or fighting censorship in whatever way is expedient for you this September.