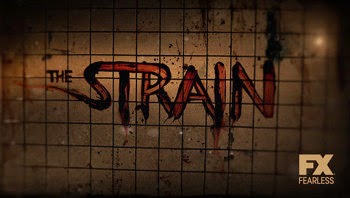 If there's one new show everyone anticipated this summer, it's The Strain. Just like all our other TV obsessions, it's on Sunday night, and it's on the often-tasteless FX and written by Guillermo del Toro. No doubt you've seen the horrible/awesome ads of a tiny worm squiggling into an eyeball.

The plot: The Strain is "the story of Dr. Ephraim Goodweather, the head of the Center for Disease Control Canary Team in New York City. Goodweather and his team are called upon to investigate a mysterious viral outbreak with hallmarks of an ancient and evil strain of vampirism. As the strain spreads, Eph, his team, and an assembly of everyday New Yorkers, wage war for the fate of humanity itself."


Now you can see the first two episodes at "an exclusive fan event" that will have food, drinks, swag and mysterious "special appearances."
Where: Reading Cinemas Gaslamp 15  at 701 5th Ave, San Diego)
When: Saturday, 26 July -- VIP Arrival at 6:30 pm / General Audience Admission at 7:30 pm
To become a VIP, you have to perform a scavenger hunt of sorts. First you have to visit the FOX (#4229), Harper Collins (#1029), and Dark Horse (#2615) booths and pick up a The Strain wristband from each one. You can do this on Friday or Saturday from 1- 4pm. Come to the theater at 6:30 pm Saturday, show your 3 wristbands and you'll be whisked inside for... well, I don't know. Probably the same experience as everyone else, but with special seating and probably some kind of gift. But it sounds like the general audience will get swag too.
Posted by Valerie