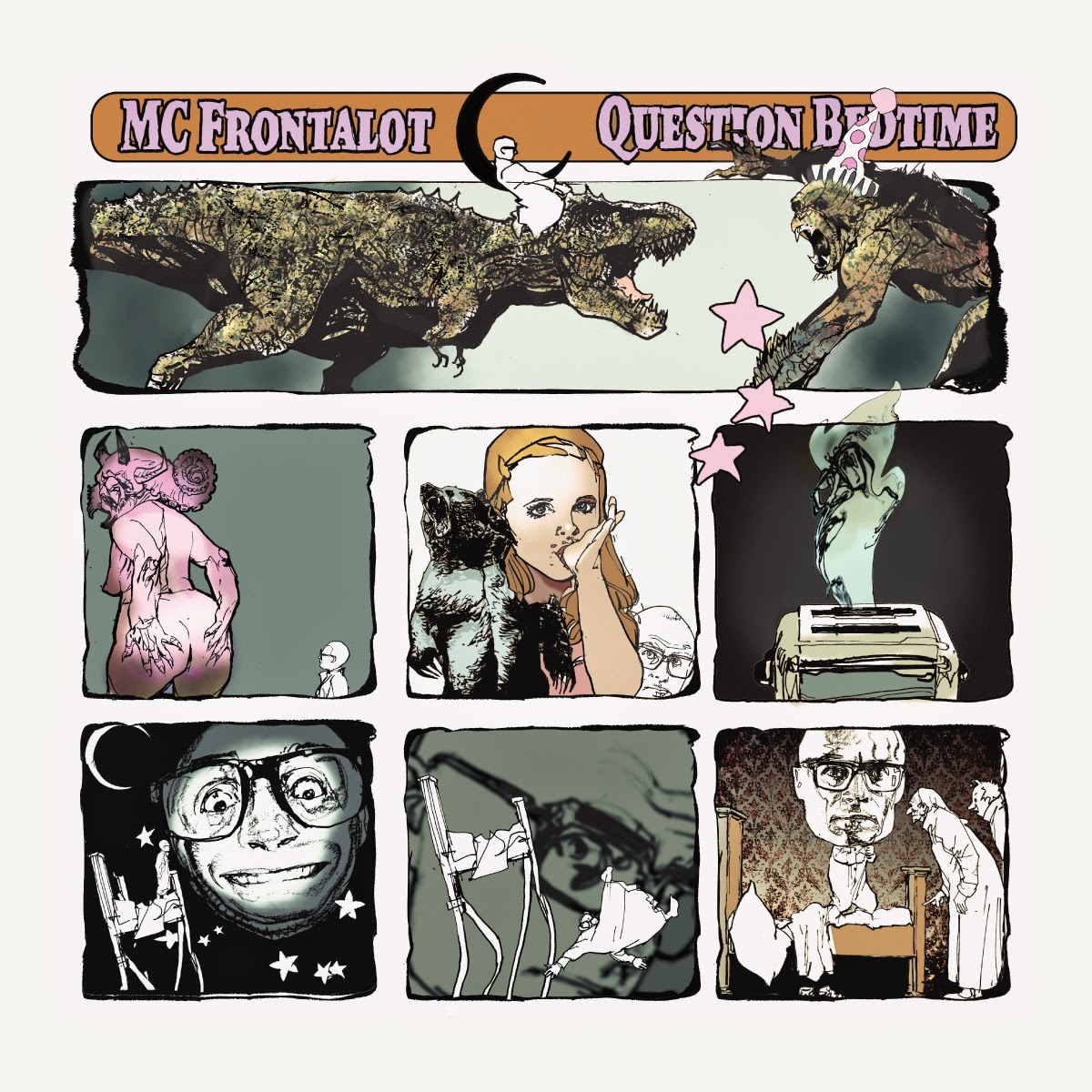 If you were at the Merrow last Friday night, you got to see MC Frontalot give an amazing show. If you didn't get to see it, you missed out - but you can find out what he's doing right now. His sixth album, Question Bedtime, will be released by Level Up on 26 August, with guests that include Open Mike Eagle, Kid Koala, Paul F Tompkins, Kyle Kinane, mc chris and others. And yes, that is the artwork of legendary comic book artist Bill Sienkiewicz on the album cover above.

I caught up with him at Comic-Con to talk about his new album and dissect the essential nerdiness at the core of the #1 Nerdcore rapper in the world.


So you're the progenitor of Nerdcore. How did that get started?

The original idea was that it's difficult to present yourself as a rapper unless you're cool. Pop stars in general are usually pretty cool but rappers are especially cool. So I was sitting there rapping into my computer and it occurred to me that if I inverted the whole notion of how cool I was supposed to be, that it would make it acceptable that I was recording these things into my computer. I was doing it for years as a hobby before it turned into a career. In the beginning I didn't have to put myself out there much - I could use my nerd skills to do it without being a rapper in real life. I could make MP3s and had control of a web server and I could put up an image gallery on the frontalot.com page. It was all real rappers with their faces blurred out, pretending it was me.

The whole thing was supposed to be this sleight of hand – that's why I'm MC Frontalot. It's impossible to pin me down. But then other people started calling what they were doing nerdcore and the press started taking an interest and the press doesn’t like you to be an anonymous person online. They want to know how old you are and where you went to high school and what you look like. So I had to abandon all the anonymity. But I eventually made my peace with it and once I got the band together around 2004, I started doing it live enough that I was no longer embarrassed to get on stage.

Then the whole thing seemed great. The fan base built up over the years and it's been a full-time gig since 2006.

So what breed of nerd are you?

I started life as a big reader - fantasy and sci-fi when I was little but I became more visual as I got older and got deep into comic books. Then video games got very fancy and honestly those absorb more of my attention than literature does these days.

In addition to being a musician and rapper, do you practice other art forms?


I’ve always been a cartoonist but I’m not terribly good at it. I post web comics for my fans and this weekend I'm a guest at the Dumbrella booth.

Who are some of your favorite comic creators?


This album is the first one that's a complete departure. The first five albums have songs on all kinds of topics like getting old or having trouble going to sleep. They always have stuff on my weird little core obsessions – there's a song about text adventures and a song about data encryption, a song about cryptozoology - stuff that's easy to identify as Nerdcore. And there's been five albums that have been very easy to identify as Nerdcore. This one, I don't know if it will be. There's nothing about computers or technology and the songs aren't set in the present day - they're all set to these really old stories.

But they're sort of magical and definitely very imaginative and I hope my audience will dig it. The seed of it is me at 11 years old in middle school in the library going through these old fairy tale compilations and bugging the librarian about missing volumes. I tried to make a record about my obsession. Maybe it is a Nerdcore record. And maybe it is a children's record - there's no cussing on it.
I don’t really have a handle on what the record is but I’m excited that I did something entirely different.

<Editorial note: I've heard the album and it is magnificent.>

How do you feel about your fans defining your work? For instance, when they see something in your work that you didn't intend?

Well, authorial intent only gets you so far. Every piece of art only truly exists in the mental landscape of whomever is consuming it. That's always their prerogative to decide what it means. But when they say "MC Frontalot definitely meant this" - we could have a debate but I'm going to have the most authority. It doesn't bug me, though. I like it when people find stuff I didn't intend that they think fits really well with the stuff I did intend.

I have a song called Origins of Species from the second record about my unhappiness with Intelligent Design becoming popular. The song is in the voice of this reverend, Reverend Frontaloud who's telling everyone how we're going to defeat the secularists. Someone stuck it on YouTube and half the commenters didn't understand the satire - they thought I was tearing down atheism and the other half said "You guys are idiots! MC Frontalot hates religion!"

And neither of those are true. I was trying to create a critique of Intelligent Design with some sympathy for people where I feel their brains have been infected by these ideas and it's not really their fault - your belief structure gets built when you're little. And you lean on other people and your culture to tell you what's right and wrong. I don't begrudge people who like to live that way. But I am mad at people who invent fraudulent ideas like creationism equals science. They're doing a disservice to people of faith. So that's one example of people thinking I intended something I didn't.

Just kidding. My favorite thing about Comic-Con is getting to see some of my buddies and all the other creator folks who have to come here for work. In the evening I get to run around and sometimes I get invited to fancy nerd parties and I can fanboy out on whoever. I also meet people like fantastic illustrators – I’m always shopping for my next album cover.